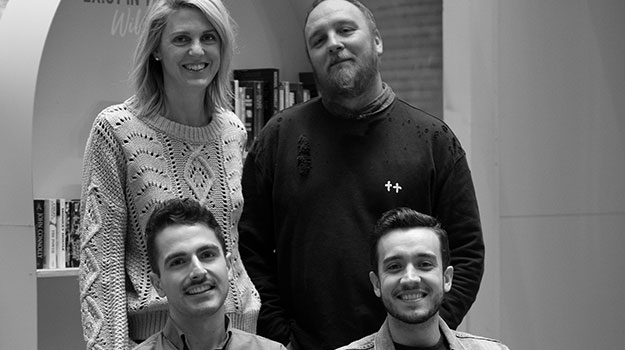 What do wonderwoman, a local beer, an undercover supervillain and an old-school Rolling Stoner have in common?

A lot, it turns out.

Following a strong period of growth, 303 MullenLowe has made a strategic investment in building a 360 degree design team with new tech specialists, as well as traditional designers.

Joining the agency in February this year, AGDA WA’s Vice-Chair and active PADC member, Alby Furfaro (front left) has been working in the WA Advertising and Design community for over 7 years. Working in both Art Direction and Design roles previously, he has developed extensive experience working with a string of local and international clients across a number of industries. As a talented and determined Senior Designer, in his short time here Furfaro has already helped deliver a progressive brand refresh for ECU; as well as New Generation Homes, repositioning it as a leader in innovative home design solutions.

Speaking of his new team, Furfaro said: “It’s been a welcome change slipping into the 303 MullenLowe fold from a more niche agency background. Having a solid team with such diverse skillsets has really helped me to think beyond personal limits and foster a progressive and collaborative environment. It’s been great.”

Another addition this year has been Jake Ransom (front right), the fourth string to 303’s design bow – and although he may sound like an undercover super-villain, his previous employment history is far more suspect. Before joining 303, he worked as an animator, storyboard artist and background artist for Explosm Entertainment on their Cyanide and Happiness series, as well as several other online entertainment companies, including Toonhole, CollegeHumor, and Lowbrow Studios. A very talented multidisciplinary designer with a strong background in animation and illustration, Jake has worked on projects including Telethon Kids Institute’s much loved animated character, Bob; Art Gallery of WA’s exhibition series Pulse and Botanicals; and ECU’s plethora of digital ads, to name a few.

Senior Designer, Madeleine De Pierres and Senior Digital Art Director, Andrew Allingham, complete the four-piece band. With close to 60 years’ experience between them all, their raft of skillsets ranges from classic illustration and typography, to traditional and digital design, retouching, app development and 3D animation.

“Beyond credentials, what I particularly love about this team is how they are constantly problem-solving on one another’s projects. Like, right now. As I write this, Andrew and Jake are optimising the motion of a monster’s eyeballs. It’s wonderful that they’ve found each other,” said Richard Berney, Executive Creative Director at 303 MullenLowe. “The diversity of backgrounds and skillsets that the team brings to the design table allows for a unique approach to challenges, with heightened creativity and world-class results.”

This article was originally published on Campaign Brief WA