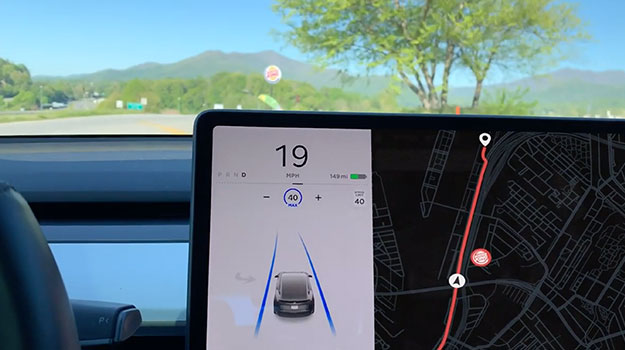 In auto-pilot mode, some cars might confuse a BK logo for an actual stop sign and slow to a halt

Smart cars don’t dominate the roads yet. But there are enough out there that a certain brand is calling on their drivers to stop by for free food.

Burger King’s latest marketing effort suggests that smart cars are so smart that they know to tap the brakes when nearing one of its restaurants. And some smart cars, it turns out, appear to identify a Burger King sign, with its uppercase red letters on a partially white background, as a stop sign.

BK released a video shot from inside what appears to be a Tesla heading down an empty road. In the video, the driver is narrating what he’s seeing up ahead and on the car’s screen. “There’s a Burger King sign that’s down the hill, and it’s going to try to stop,” he says. “Stopping for traffic control for a Burger King sign.”

The campaign is based on Tesla’s autopilot and appears to have been shot inside a Tesla, but Tesla itself was not involved in the project. Small text in the campaign video spells out that no automaker or map company’s endorsement is suggested or implied.

The “Autopilot Whopper” work comes from Andrey Tyukavkin, executive creative director at Publicis Latvia, in collaboration with MullenLowe U.S. You might remember him from the deepfake videos he created of famous ad leaders including Alex Bogusky, David Droga, Arthur Sadoun and Eka Ruola.

Like many Burger King campaigns, there’s a giveaway offer. People who share a video or picture on Twitter of their smart car outside a Burger King restaurant, using the hashtags #autopilotwhopper and #freewhopper, can get a free Whopper on June 23, or while coupons last.