MullenLowe U.S. has made chilling postcards for towns scarred by mass shootings to make another urgent appeal to Congress, whose tilt toward Democrats brings some glimmer of hope for stricter laws.

Welcome to the USA. Home of mass shootings.

Advocacy group Change the Ref makes some of the most creative and impactful campaigns calling for gun reform. Its latest, from MullenLowe U.S., uses the trope of tourist postcards to make another urgent appeal to Congress, whose tilt toward Democrats brings some glimmer of hope for stricter laws.

Renato Barreto and Marcelo Maciel, associate creative directors at the Boston agency, began the project a year ago, with a colleague, Marco Martins (who has since moved to Arnold in New York).. It grew significantly in scope over many months, and is being released this week ahead of the third anniversary of the Valentine’s Day shooting at Stoneman Douglas High School in Parkland, Florida, that killed 17 people—including Joaquin Oliver, son of Change the Ref founders Manny and Patricia Oliver.

The American Shamecards Collection features 53 postcards (with more on the way), designed by more than 30 designers around the world. Each uses the familiar 3-D lettering of traditional tourist cards, but with the scenes that are grim indeed—with the designers not shying away from the gruesome reality of these shootings. 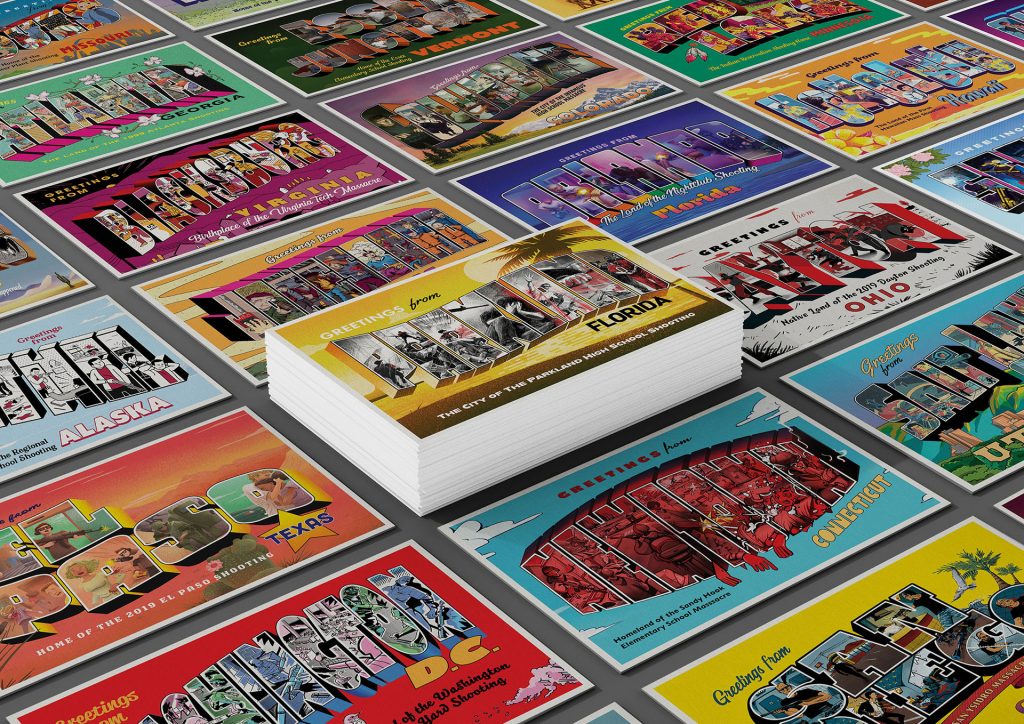 Check out some of the cards below, referencing Parkland, Newtown, Colombine and El Paso—towns now known partly (in some cases almost exclusively) for the horrific and preventable murders that happened there. 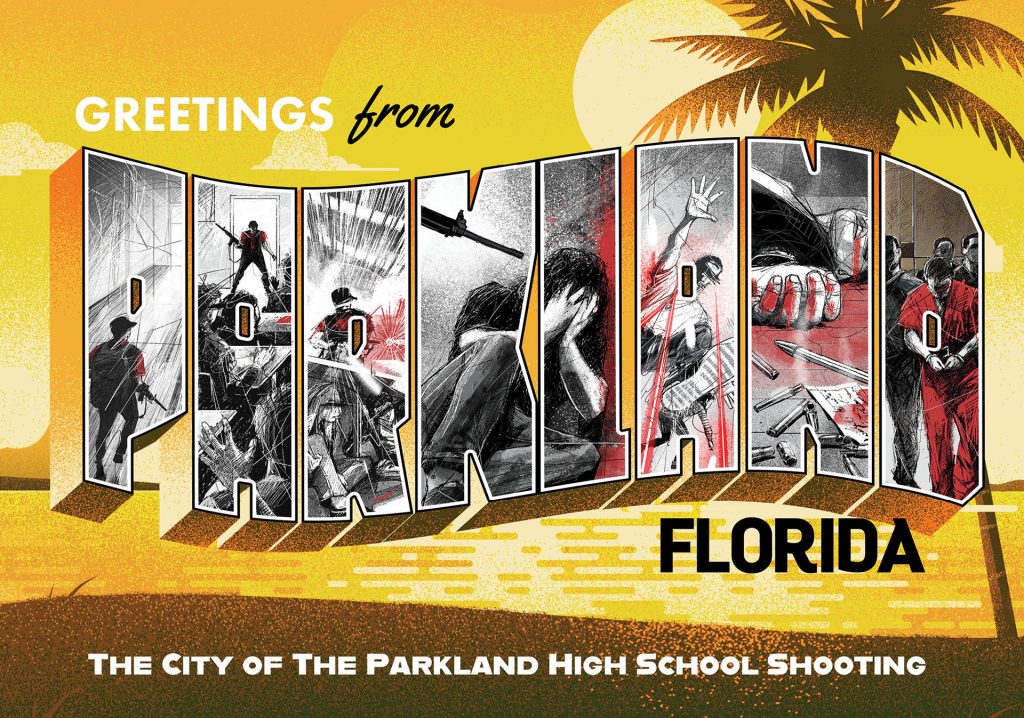 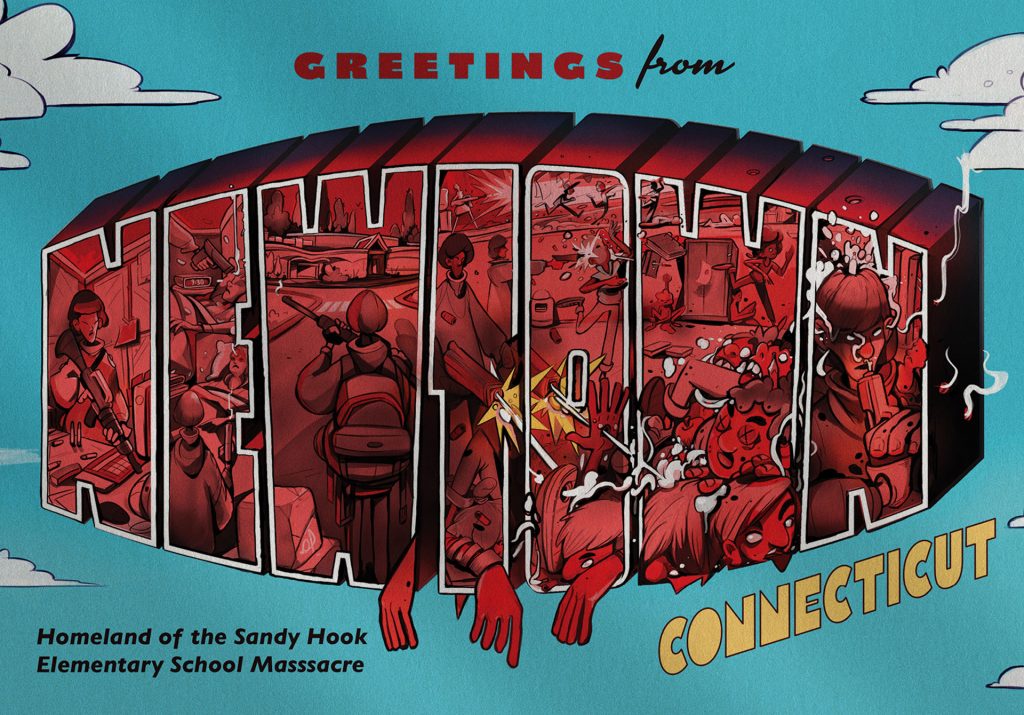 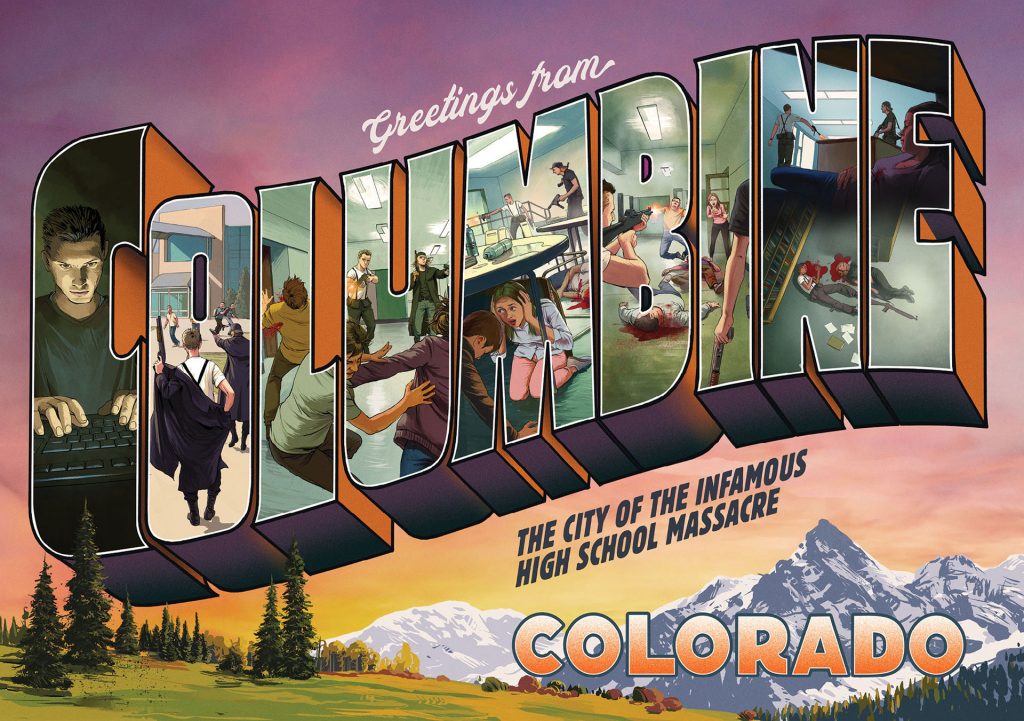 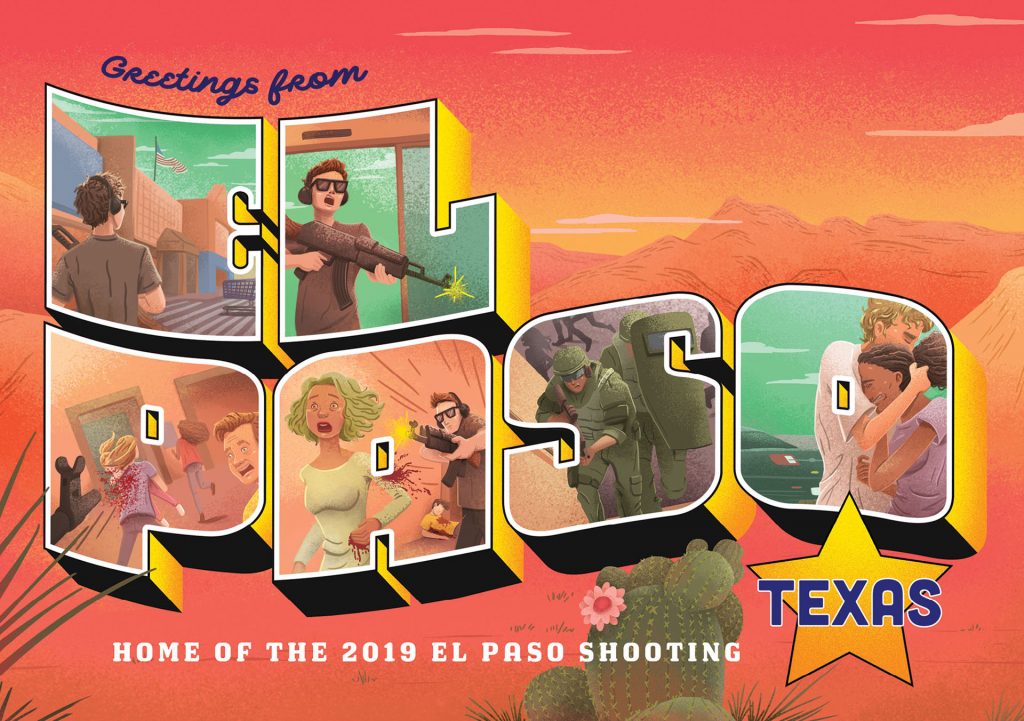 Change the Ref is a longtime client of MullenLowe U.S.’, and finding creative ways to bringing attention to the issue of shootings is something of an ongoing, open brief at the agency. This project was initially inspired by Martins, who suggested making postcards of shooting ranges where people practice firing off machine guns.

“When he had he said that, I said no, all these cities are known for their gun violence, not only because of the machine gun places,” Maciel tells Muse. “Let’s do this bigger. Let’s make this a postcard to be sent to Congress. The idea started to grow.”

They started with some of the most famous mass shootings of all—Parkland, of course, and also Columbine, Newtown, El Paso. They began to recruit designers from around the world to illustrate them.

“We started researching and we realized pretty much every city has an iconic 20th-century postcard, and every state has at least one mass shooting,” says Barreto. “We’re doing this to send them to Congress. We need the representatives to feel how people in these places are feeling.”

At first, they wondered if there might be some backlash from the families of the victims. “It’s so graphic and everything,” says Maciel. “But then the response we got was a lot better. People want these to be shown. Other families began asking for postcards of the mass shootings that they suffered through.”

They wanted the postcards to be beautiful, Maciel adds, “but when you look closer, you realize it’s not beautiful, it’s horrible.”

The illustrators come from all over the world. Many are from Brazil, where Barreto and Maciel come from, but others came from countries including the U.K., Italy, Germany and Qatar. Several designers made multiple cards—Jennifer McMahon of the U.S. and John Bogéa of Brazil did six each; Emílio Amora of Brazil did five.

The overseas designers in particular were energized by the issue, largely because they haven’t been desensitized to it like so many people in the U.S. have.

“We don’t have mass shootings where we come from,” says Barreto. (He and Maciel hail from Brazil.) “The illustrators were excited because, honest to God, this kind of doesn’t make sense. Everybody wanted to engage. It shocked me how people around the world were engaging with this uniquely American issue.”

“When we think about Columbine, Newtown, Parkland, we don’t know anything else [about these towns] beside the mass shooting,” Maciel says.

There is also a video with Manny and Patricia talking about the project:

“Manny is in Parkland; we’re here in Boston,” says Barreto. “We had a script, but Manny has his own force and his own process. Their story is so much bigger than everything I could have written. As Manny was speaking, we were saying, ‘OK, this is better.’ We shot another take, and the second take was better, and the third take was better, the fourth take was better. And we ended up with what we have right now.”

Visitors to the site can choose a postcard, enter their first name, pick a person in Congress to send it to, and MullenLowe U.S. will mail a physical postcard out. Several hundred copies of each card have been printed. 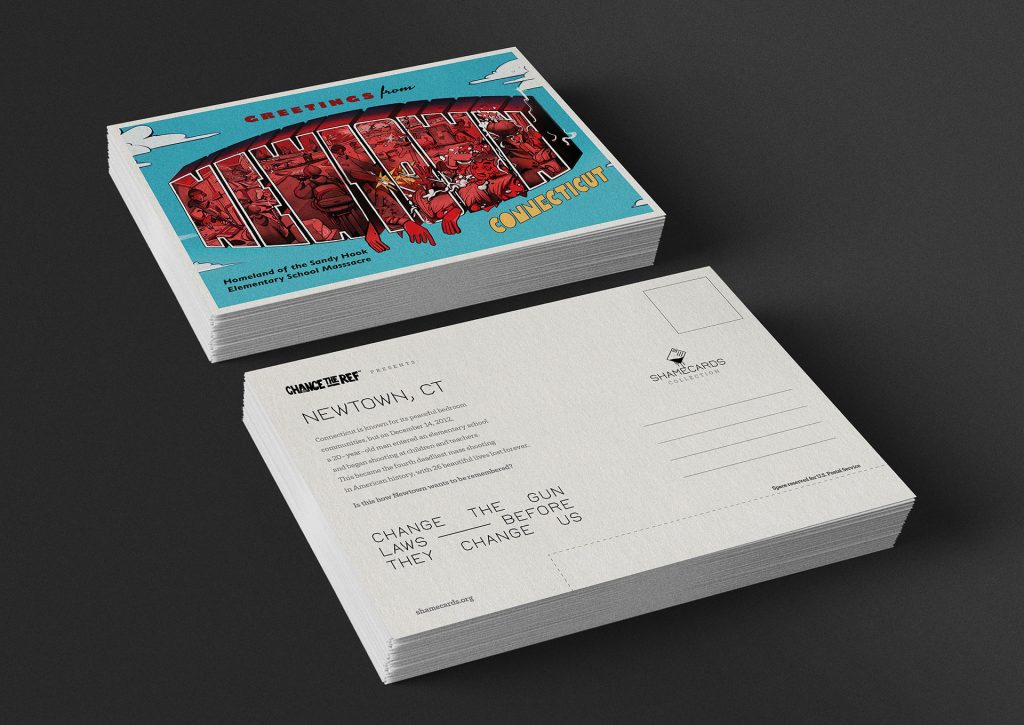 With the Democrats taking control of the White House and both houses of Congress, there is cautious optimism that changes to gun laws might be possible—although Senate Republicans still have the filibuster to block proposed legislation.

Says Barreto: “Manny was right when he pointed out we have the majority, we have the chance to change something right now. So let’s push it.”

“America is known for mass shootings that happen over and over and over again. It’s time to turn this shameful reputation to a message of bravery, vindication and common sense,” Manny Oliver said in a statement. “Shamecards were created to embolden lawmakers who wouldn’t budge on gun control to stand up to the NRA and to challenge the representatives and senators who promised us they were on our side, to keep their promise.”

In addition to the website and postcards, a Shamecard mural will be on display in Parkland, with pop-up postcard stands in Los Angeles, Houston, New York and Seattle.

“Even in the past few months, we’ve seen voters and lawmakers reconsider what they stand for and what the right thing is to do for our country,” said Oliver.  “Let’s change the gun laws in America before gun violence changes us.”