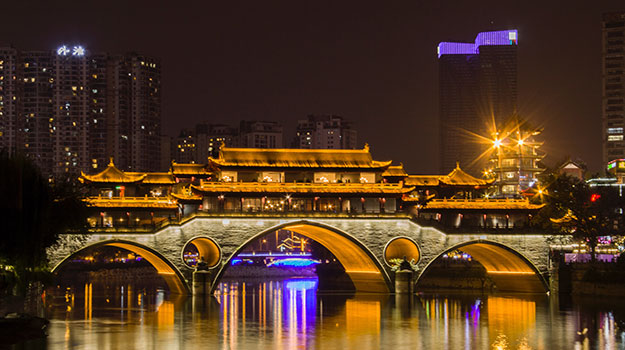 Chengdu is the fourth in a series of articles called “Creative Cities,” which highlights markets that have been growing in strength as creative hot spots.

Except among seasoned tourists, experienced China hands and Chinese nationals, the name Chengdu is likely to be greeted with a guess at best: “That’s in China, right?” At a stretch, some people might know two of its significant symbols—hotpot and pandas. Chengdu’s under-the-radar profile is changing fast.

Chengdu has been flagged by adventurous tourists as the place everyone wants to visit. Despite a megacity population of around 16 million, if you include outlying villages, it’s widely touted as one of China’s most liveable cities, piloting sustainability with masses of greenery, parkland and tracks for walking and biking. Appreciated for a pace of life that’s relatively laid back—with the emphasis on relatively—Chengdu stands out for a quality that’s unusual by the standards of big cities in China: lifestyle appeal. The surrounding fertile plain is known as “Land of Abundance.”

Maintaining that lifestyle appeal will be a challenge now that it’s one of the fastest-growing cities in China. A key factor in this growth is its geographical location, about 1,300 miles due west of Shanghai. It’s perfectly placed to be a major marketing hub for the west of the country and for China’s burgeoning Belt and Road Initiative. It lies within an hour’s flight of provincial capitals such as Xi’an and Kunming and the industrial city of Chongqing. Despite its desirability and accelerating development, Chengdu is far from fully developed, so the cost of living and average salary are still lower than that of Beijing and Shanghai.

China has a long tradition of strategic planning for its development, which bodes well for the predictability that business favors. The city’s plan for building a cultural creativity center focuses on the six elements of the new economy—digital, intelligence, green, creative, mobile and shared—which gives companies a clear idea of what the authorities are keen to encourage and support by 2022. With this emphasis on technology, the city now boasts the presence of well over half of Fortune 500 companies, including Intel, Dell, Siemens, IBM and Microsoft, and all giant Chinese internet companies have R&D centers in Chengdu, including Alibaba, Tencent, JD.com, Baidu and ByteDance.

As one of the six elements in the city’s planning, Chengdu is focusing on building up creative capacities on top of the deep technical skills that abound in the city. Developing these capacities will help Chengdu land more of the creative roles that are currently fulfilled by the far-away coastal cities of Shanghai and Hong Kong and underscore it as a place in which marketers should definitely consider investing.

Chengdu is also a magnet for students. There are over 25 national, provincial and private universities dotted around the city, including the University of Electronic Science and Technology of China, the Southwestern University of Finance and Economics and the Sichuan University, which is one of the top 10 universities in China. With strong government support, all these universities and colleges continuously bring over 400,000 high-quality graduates to the market, helping Chengdu to become one of the top 10 internet and innovation centers in China.

Buzz, zing, mojo, the X factor, momentum, vibe—there are many names for that atmosphere of energy and promise that some places manage to develop. It’s the sort of energizing atmosphere that smart marketers seek out and love to work in. It’s the sort of atmosphere they can find in abundance in Chengdu, even if they don’t understand the lyrics of the city’s many hip-hop and rap artists. The culture of the city is both steeped in long tradition and keen to try out new ideas, keen to show that it offers a mix of attractions that are just not available in China’s megacities. For marketers, it’s an enticing mix, so go and see for yourself why Chengdu’s slogan is, “A city you will never leave once you come.”