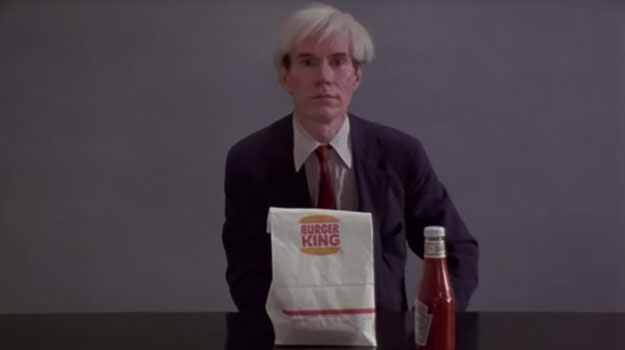 A Sunday night diary entry from the team tasked with creating social media buzz around the #EatLikeAndy spot. 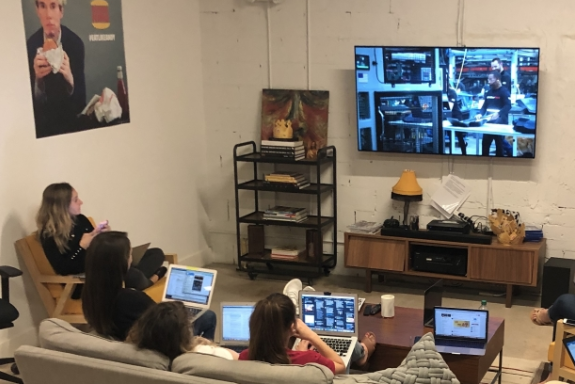 Anytime the words “super” and “bowl” are used together in a client briefing, you know something big, and potentially historic, is about to go down. So when Burger King told us we would be supporting agency David Miami’s Super Bowl spot, all hands were excitedly on deck to help amplify it on social.

It was immediately clear #EatLikeAndy had the “x factor” consumers would talk, post, and tweet about on social. We left our meeting eagerly awaiting the official green light, crossing our fingers that Burger King would air its #EatLikeAndy Super Bowl spot.

On January 2, we received the news we’d all been waiting for: Burger King would return to the Super Bowl after a 13-year absence. We had 33 days to strategize, concept, and plan our attack to spark social conversation and respond to questions and comments regarding this iconic piece of film, which would excite some and baffle others (in true Andy Warhol fashion).

Planning for the Super Bowl

How could we tease the Super Bowl spot in a way that would spark curiosity throughout the social sphere? What questions would come from seeing #EatLikeAndy? Would people recognize Andy Warhol? Would they know where the footage is from? Would they be OK with us using the footage? And, most importantly, how could we use these questions to inspire social conversation when millions would be tweeting and posting about other Super Bowl ads? We gave ourselves two goals: Make people thoroughly confused about what was coming from Burger King before the Super Bowl; and get people to use #EatLikeAndy during the game and throughout the following days.

We worked closely with David to push out a variety of short teaser clips of the infamous King anxiously preparing a strange set 10 days leading up to Super Bowl.

These videos were designed to generate buzz and be shared. Ultimately, we challenged ourselves to tease out what was coming in an intriguing way without giving it away.

Each video hinted something unique was being planned, using cryptic copy like “preppin’” and “testing 1-2-3” to allude to the fact that what we were going to air during the game would grab their attention.

To extend the reach of the campaign in a more participatory way, Burger King worked with delivery partner DoorDash to develop a Mystery Box. This was a special order customers could place to participate in Burger King’s big game stunt so they, too, could get their “15 minutes of fame” on social, whether they knew it or not.

The Mystery Boxes contained white wigs, ketchup bottles, and a note from the brand instructing receivers to hold on to their items until the “big game” on February 3. No further explanation was provided—only an assurance that everything would make sense shortly.

The combination of social teasers and promoting Mystery Boxes sparked curiosity and people wanted to be in on the secret. The 6,000 boxes were gone in less than two days, which resulted in historically high home-delivery sales for Burger King several days in a row.

Additionally, people on social began asking what the “mystery” was and what Burger King had up its sleeve: there were 2,000-plus mentions of Burger King’s Mystery Box before the Super Bowl. 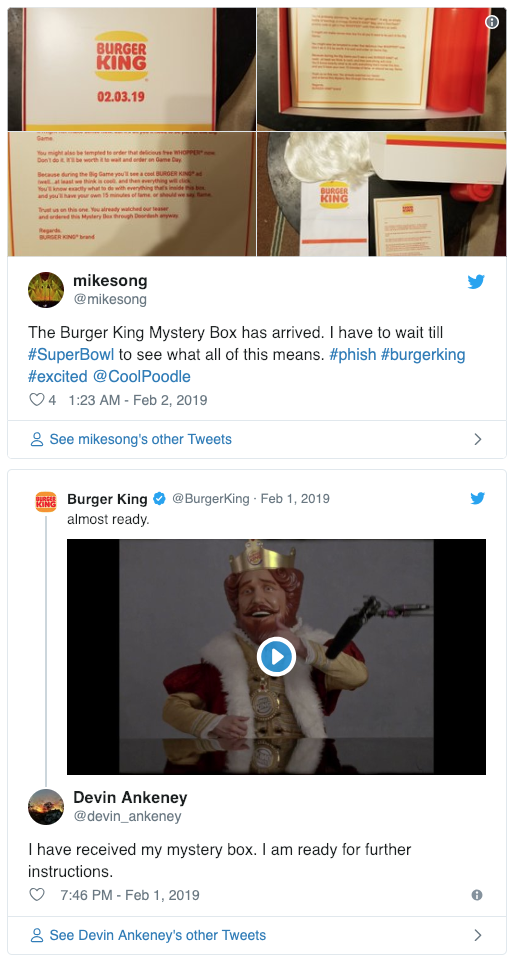 February 3: Super Bowl Sunday finally came, along with the full Burger King marketing team and MullenLowe, for a collective war room at David’s office in Miami.

Everyone gathered in one decked-out space to watch the game, ads, and, most of all, initial reactions to the Mystery Box and people asking on social what would come from Burger King.

Aside from teams enjoying the chance to come together for a watch party, tensions were high. All the dominoes had been lined up, now we just had to watch them hopefully fall in our favor.

The second the spot aired, it was all hands on keyboards. Our plan included everything from posting the spot to changing our profile header images to reactively engaging with the staggering volume of engagement and conversation around the spot.

As anticipated, half the conversation revolved around genuine confusion over [Warhol’s] identity or what they’d just watched. The other half applauded the daring spot for successfully disrupting the stream of typical Super Bowl ads.

As everyone in the biz knows, as long as they’re talking about you (confused or elated), you’ve done your job. People started eating like [Warhol] almost immediately and posting their videos to social. The teams crowded around the community managers’ social monitors to watch their wig-clad participants finally #EatLikeAndy.

Social conversation and community management came in three phases after the spot aired.

It started with confusion… 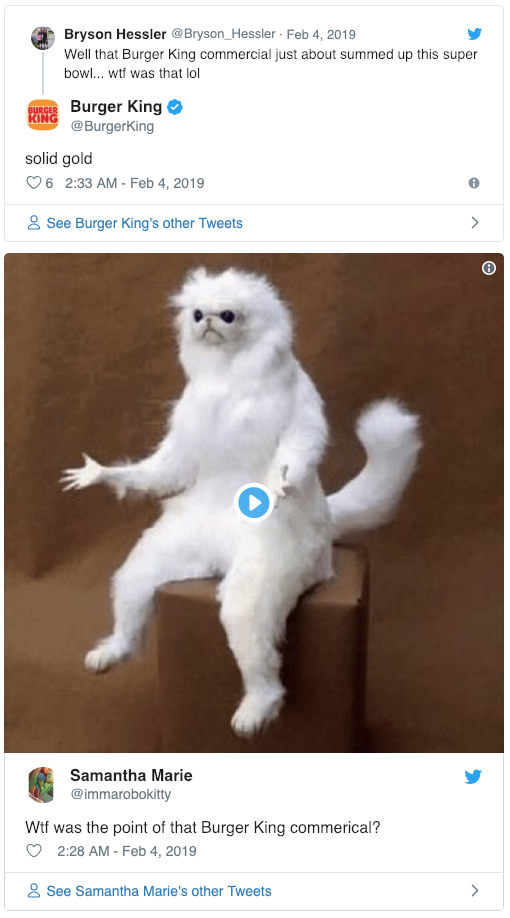 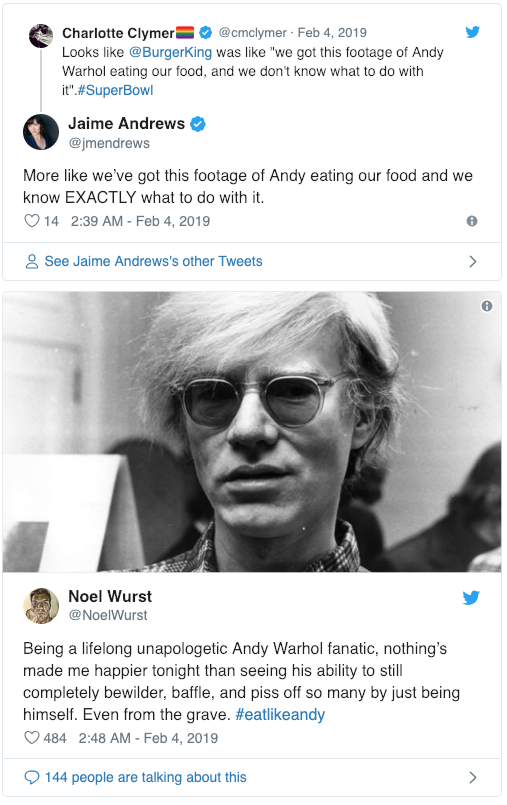 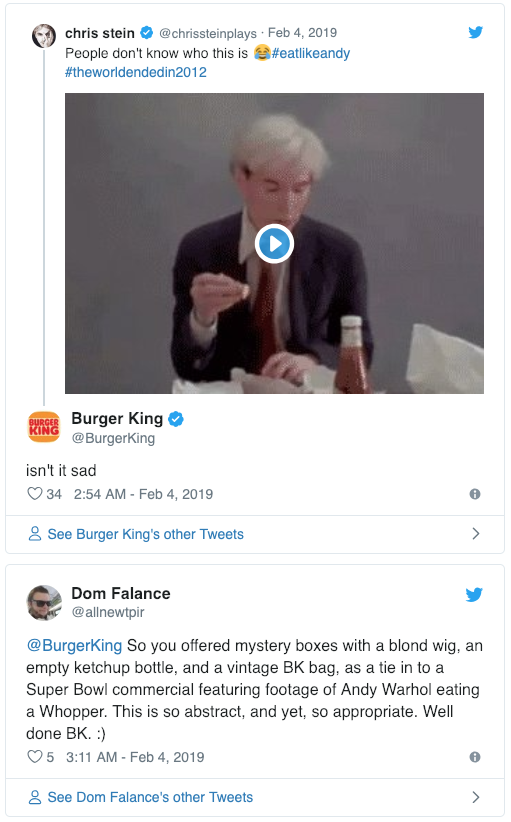 Then people actually started to #EatLikeAndy! 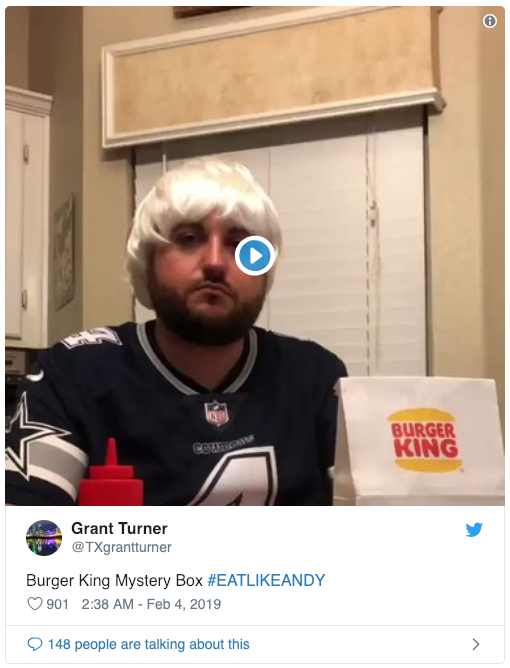 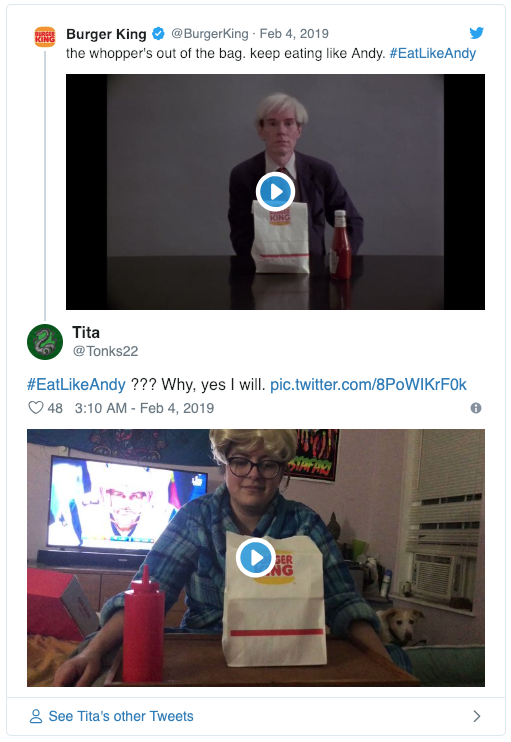 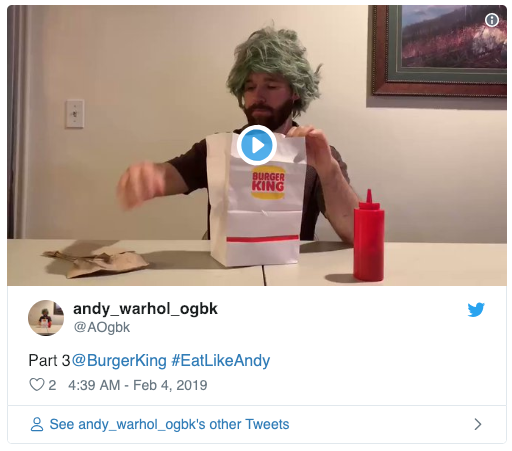 Since the #EatLikeAndy Super Bowl spot aired, it garnered 40,000-plus mentions on social media. What started out as conversation sparked by confusion pivoted overnight into people offering their opinion of the spot and explaining its significance.

#EatLikeAndy has continued to inspire user-generated content with 10,000-plus uses of the tag, and publications such as Time magazine rationalized the spot for the public by calling it “refreshing” amongst a backdrop of Super Bowl clutter.

While other spots focused on using celebrities, we were able to guide an entirely unique sub-conversation of people stuck on the fact that “BK actually did that.”

This article was originally published on PR Week