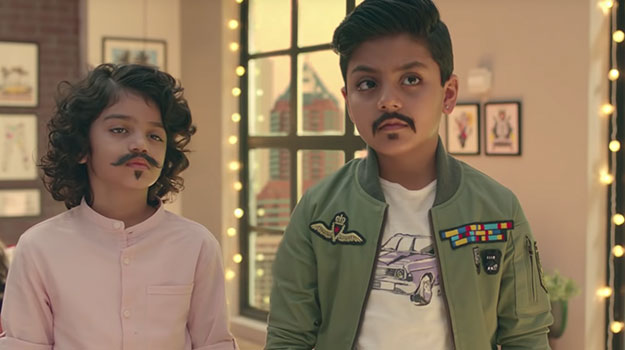 In a superstar-heavy ad campaign, Flipkart tries hard to position itself as the go-to e-commerce space for trendy fashion. But it’s not the famous faces that caught our attention. We were more excited to see Flipkart’s famous ‘child-adults’ (kidults); a creative tool the brand first experimented with in 2011 (remember the ‘No Kidding. No Worries’ campaign). The agency at the time was Happy Creative Services (which was subsequently acquired by Dentsu and renamed Happy mcgarrybowen).

Lowe Lintas conceptualised, scripted and executed the campaign (both editions of the Flipkart Fashion campaign) for television. Dentsu Webchutney worked on the digital leg of the campaign.

We at afaqs! were curious about the challenges a creative team might face when carrying forward another agency’s idea – in this case, Lowe Lintas carrying Happy’s ‘kidults’ concept.

We spoke to Hari Krishnan, president, Lowe Lintas about it and he was happy to explain, “To adopt a creative device conceived by another outfit and make it work better, is the biggest challenge. Over the last three years, since the kidults concept was re-introduced, Lowe Lintas has managed to give it several new dimensions, contexts and characterisations which have contributed to the success of several product categories of Flipkart from mobiles and furniture to fashion and Big Billion Days.”

Krishnan adds, “This is the second time in the three-edition-long campaign where the creative device of ‘kidults’ has been used with adults. The brief was to establish Flipkart Fashion as India’s ‘fashion capital’ where the latest celebrity trends are updated every day.”

But does the latest creative rendition of the ‘kidults’ idea work? Tanuja Bhat, group executive creative director, L&K Saatchi & Saatchi, feels the concept still has scope. She says, “Like any big new concept, it needs to evolve, get more relevant with time and stand out despite the content explosion that we are experiencing now. The challenge is to stay surprising.”

Bhat opines that brands today are so keen to cash in on the advantages of someone’s popularity (in this case, celebs like Alia-Ranbir), they allow the script and idea to take a back seat. She adds, “The idea should be able to get the brand at least as much value from a celebrity (if not more) as the celebrity gets from the brand.”

Real-life celebrity couples may be a package deal for a brand, but they alone cannot guarantee success. Brands that have roped in couples recently include Myntra (Virat-Anushka) and Lloyd (Deepika-Ranveer). Examples from the past include Prestige (Aishwarya-Abhishek) and Clinic All Clear (John-Bipasha).

While this ‘real-life star couple’ format certainly helps give brands the fillip and consumer attention they need, some experts feel it’s a lazy strategy. Others caution against compensating for a good creative idea/script with stars.

On the same topic, Amit Shankar, NCD, Publicis Capital, says, “Real-life celeb couples have been used for a long time now. Ajay-Kajol, Aishwarya-Abhishek etc. were used for several endorsements. It is important for brands to bring out their chemistry in a better way, keeping the core values of the brand at the centre. The scripts should be crafted accordingly. Sometimes the brands get carried away and deviate from the same. The introduction of a star couple in a long-accepted campaign format can be a double-edged sword – if done well, it adds to the memorability otherwise it runs the risk of falling flat.”

When discussing how kidults has become Flipkart Fashion’s idea of communication, he says, “Flipkart has been using the ‘kidults’ concept for a long time and it has worked for them. The power of this execution is that they can never be short of entertaining stories to share with consumers. There’s still some juice left in this idea, provided the executions are interesting.”

This article was originally published on afaqs.com