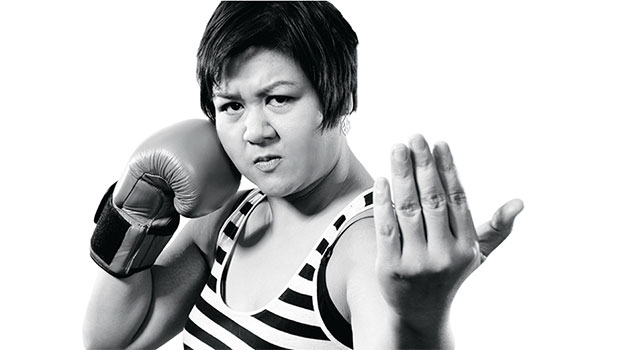 Abi Aquino is a self-confessed geek and all-round fan of advertising and with an exciting career has taken her in many different directions, her love and passion for the industry is what’s lead her to the point of CCO at MullenLowe Philippines.

However her entry into the industry wasn’t quite as straightforward. She studied psychology and marketing at De La Salle University in Manila. Part way through her degree the university announced that they were offering advertising as a course, but Abi recalls not being allowed to transfer no matter how much she asked. Shortly after graduating she took on a role as editorial assistant at the Manila Chronicle newspaper before leaving to join Y&R. Eighteen months after this she left for MullenLowe Philippines and became what she affectionately terms a “Lowe baby”.

But, while she’s now CCO at the agency, her career path took her beyond the agency. A few years into the stint Abi decided to leave. “I stopped in the early 2000s because I didn’t think I was good enough. Strangely enough, I left because I was really disappointed with how I was performing and I was second guessing my life choices.” Upon the decision to leave, Abi worked as associate editor for Cosmopolitan Philippines, had a role in theatres, was an event planner and worked in production.

Despite having the break and taking on a host of different roles, Abi has not one regret about any of the choices she made. “All those different things I did in that three to four year break gave me a skill set I didn’t realise I needed”. One particular standout moment for her was working in productions in Singapore where she says living alone allowed her to flex her muscles. “It was my first time away, in the Philippines you stay at home and with your parents until you get married. I’m still single, its quite different the culture. So when I lived in Singapore, that was a lot of growing up for me.”

In 2007 Abi’s former creative director asked her if she was “done with her quarter life crisis” and with that she found herself back in the comfort of her MullenLowe team in a role she found she missed more than expected. “I went back because I really missed it, even when I was doing other things I was still checking on the best ads. I’m a geek, I’m a fan. All I had in my head was I just want to work in advertising; I don’t care if I’m not good enough.

“Looking back, I think it was just a bit of maturity that I needed to realise that I really did love working in advertising. It is my first love.” With the news a few months ago that Abi had been promoted to CCO she jokes that in 2007 she put her head down, looked up and she had reached this incredible position.

With a wealth of experience under her belt Abi is in a unique position to both see the Filipino industry through local eyes but understand just what makes it so unique: ‘We are very emotional, very passionate, sentimental and I think that shows in a lot of spots. A lot of our bread and butter advertising is pretty much jingles and songs. The ads that get shared are the ones that are tearjerkers. There’s a lot of ‘sadvertising’ going around here.”

But times are changing and with it so are consumers’ mindsets on what they want to see. Abi explains that when discussing briefs with clients she reminds them that their mothers, wives, sisters and cousins are interested in the new wave of fantasy television and in particular a Korean show called Kingdom. “Its zombies invading Korea in a particular dynasty period wearing beautiful costumes and they’re running for their lives. But the clients will say yeah but I want my mother in the kitchen. Consumers just want to see something that entertains them, something that may say something different or surprising. It’s not always putting a mum in the kitchen or by the laundry area. We shouldn’t talk down to the consumers.”

Does this new interest reflect progressiveness in the mentality of the Filipino people? Abi believes the locals are “smart enough to accept real messages” and adds: “I really do think they’re ready and they’re not as traditional as we think they are”.

With that in mind, the new spot by MullenLowe Philippines for Avon aptly titled #NudeNormal reflects a decision to be more inclusive and challenge not only size norms – but gender ones too with a transgender model showing off her figure. Abi says: “I am glad Avon is one of our clients because it does help people accept all of these new realities. For me for most of my life I’ve always been a big girl and I’ve never had that kind of imagery growing up.”

She adds that she has also faced issues with her skin colour as she has been considered dark by Filipino norms and cites working with brands such as Avon as a way for showcasing positivity and confidence for all.

Of course, skin colour has played a major role in world events recently so curiosity led me to ask if Abi whether the Black Lives Matters movements has inspired conversation in her home country. “With skin colour no, not as big as the ones we’re seeing in the UK and the US. I have seen a couple of brands being ripped to filth a couple of years ago because one featured a brown face”.

However, the nation is facing their own issues at present. “The bigger things that are on people’s minds are more to do with the basic rights in relation to the pandemic, it’s getting the basic necessities to the under privileged.”

Abi adds how this has influenced her own thinking: “Being locked down really makes you stop and think about what you need, what is essential for you, what is essential for the people you care about. How do we make our time here just a little bit more useful? So sad but true. That’s what I’ve been thinking about. I love advertising, I realise its so ridiculous. It’s one of the most ridiculous things one can do for a profession, compared to the doctors and the nurses who are risking their lives. I have it good, we have it good, it makes me think about what can I do to make my time on this earth a little more meaningful with my skills, what can I do in advertising to make this job make sense or help people other than myself.”

Alongside with living through Covid-19, the Philippines has been getting to grips with a new anti-terror law that has potentially devastating consequences for those delivering aid who are deemed criminals. Abi and her team couldn’t sit quiet and so made a silent but powerful statement in support of the people during this period. “We came out with statement masks. They’re essentially facemasks that look like hands clasped over the mouth as part of a very strong and silent statement on how we feel about anti-terror law. Little projects like that go a long way I feel.”

With Abi’s passion and ability to guide conversations about change and the future what does her future look like? She jokes that for a “young, unassuming, late bloomer of a creative” to be at the position she is in is a surprise for herself. But she’s allowed herself to remain humble as the agency has a lot of faith in her and she wants to use this to “do right by them”. “It also makes me want to have a hand in shaping how Philippine advertising will be seen by the rest of the world.”

In true Abi form, with her wit and good humour, she is dedicated to putting the Philippines on the world map even if she breaks out in a cold sweat at the thought of such a big undertaking!