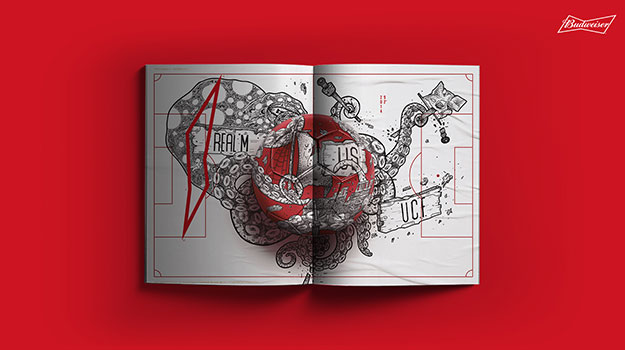 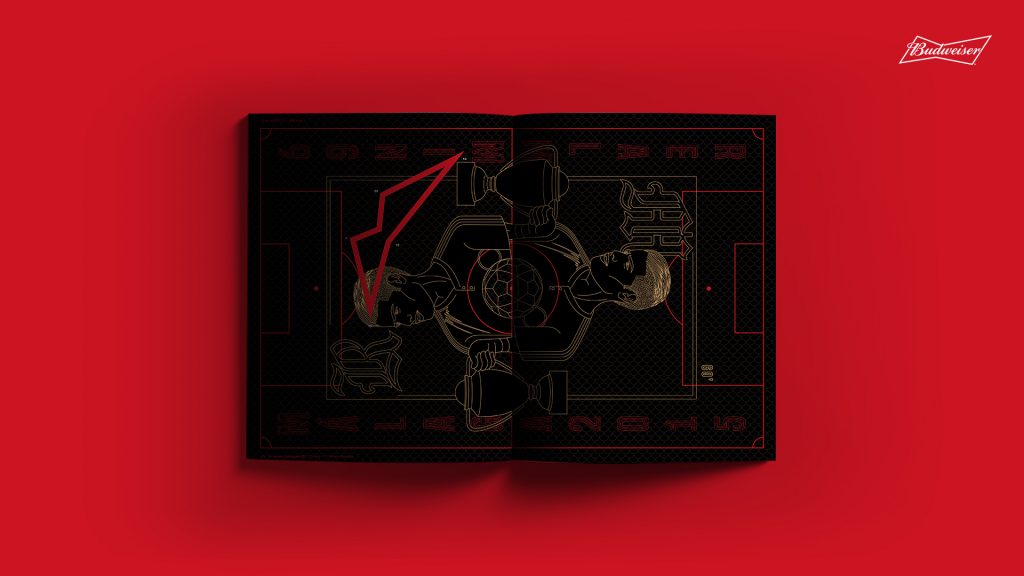 One year ago, Budweiser announced a multi-year partnership with the UK’s Premier League and Spain’s La Liga football leagues, a deal spanning five continents and more than 20 countries around the world. MullenLowe SSP3 was tasked by the AB InBev beer brand to communicate the essence of this monstrous deal in Colombia.

While researching ways to do that, the team at MullenLowe SSP3 realised that Budweiser had been a part of these leagues all along. After analysing data from over 4,000 goals from the Premier League and La Liga’s history, the agency spotted a similarity between the formation of the goals and Budweiser’s famous ‘bowtie’ logo. From this, ‘Goals of Kings’ was born, a campaign that allowed Budweiser to become part of the history of Europe’s most popular and famous sport without ever officially being there before.

12 of the goal formations have been immortalised in a book that sits at the heart of the sponsorship in Colombia. Each sequence has been beautifully crafted using different art direction and copy techniques.

LBB> What was the initial brief for this campaign and what were your thoughts when you first saw it?

Carlos> The brief was given to us during a lunch with the client, about six months away from the deadline. As we were at a planning meeting, we were given no insights, no target group, no data, just a simple and exciting fact: Budweiser signed a deal to sponsor the two most important football leagues in the world. It would be official in September and we needed to communicate this deal to people in a disruptive way. It was one of the most exciting briefs we’ve ever received: a huge and inspiring brand and a huge and inspiring sport. Beer and football sounded like a perfect combination for us.

LBB> Thinking back to the early days of this project, what was your initial thinking? What kind of ideas were you debating?

Carlos> I must confess, I felt really inspired (and jealous!) when ESPN’s Book of Mamba came out a couple of years ago. It’s an idea that has stayed with me, and I’ve been trying to convince my creatives and find an opportunity to make one ever since.

When we got the brief, several teams came up with a number of ideas to share in the final meeting before presenting to the client. There were a couple of print ideas, influencers’ ideas and PR stunts, among others. One of the art directors in the agency was presenting their idea when he took out his mobile phone and showed us just a simple mockup video of an old Manchester United play. While the players were running behind the ball, a red line was forming as the ball was moving. Suddenly, when the play was finished, the Budweiser Logo was drawn in the video. It just blew my mind. I loved it. Then, they just said: “OK, remember the book you were thinking about doing?”. The rest is history! The client loved the idea too and we decided to create not just a book, but a full media campaign about what they found. 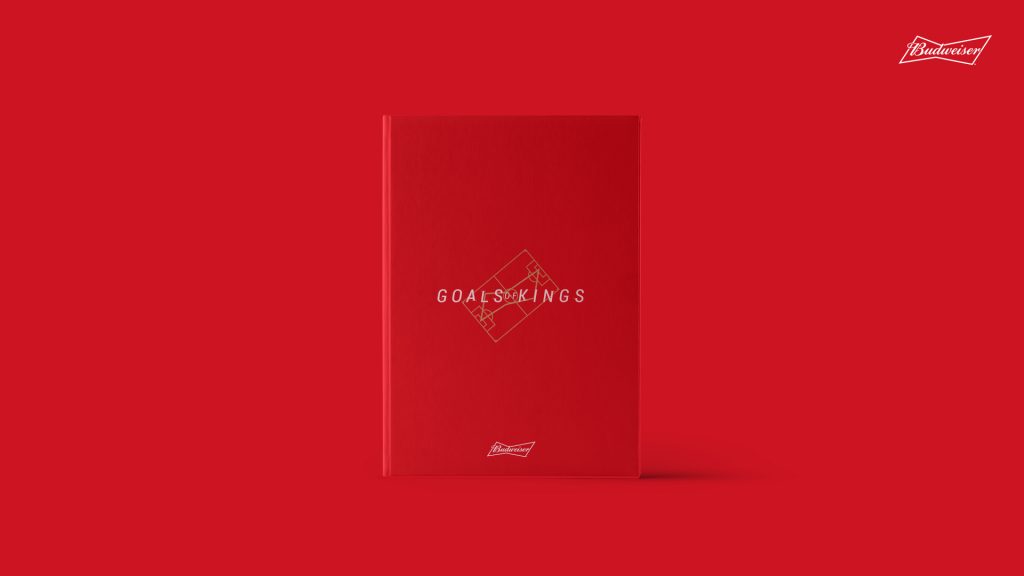 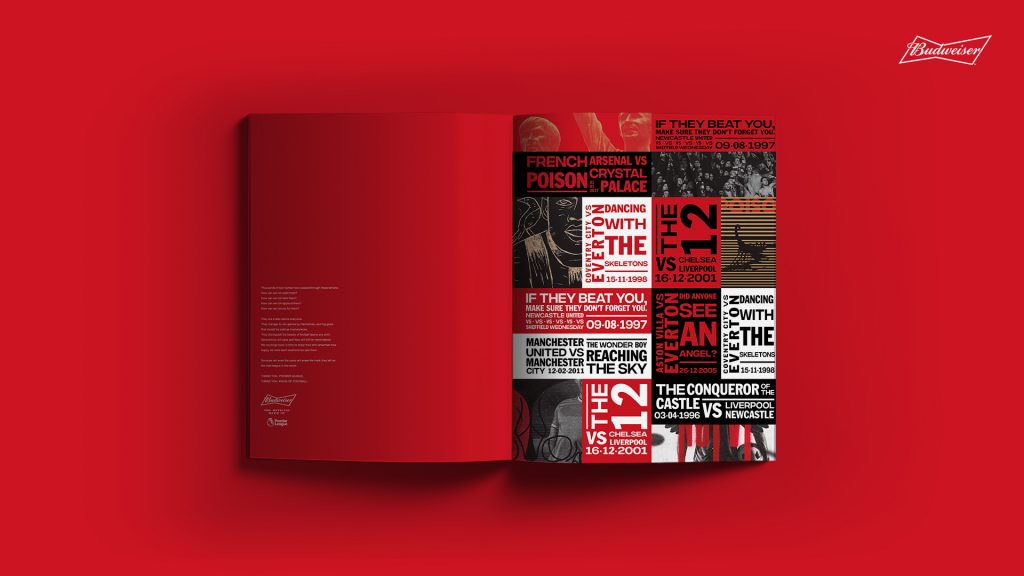 LBB> Tell me more about what inspired this idea to find the Budweiser logo within goals? It’s a pretty crazy idea – where did it come from?

Carlos> I guess when you see what the creative team found that afternoon, it does seem a pretty crazy idea! But when I dug deeper, I realised that this idea was something only an art director could find. The guy behind the idea (Byron Poveda, art director) has a very specific style based on shapes and lines. He has a unique way of creating abstract forms around objects to create logos. That, combined with the fact that he DOESN’T like football, makes more sense: I can imagine him just seeing a bowtie when seeing the Bud logo, and seeing just lines when watching a game of football. Then, he just connected them… and boom, there you have it.

LBB> Once you had that idea, I guess you had to check whether it was feasible or not? And whether you could actually find the bow tie within other goals? What was that process like?

Carlos> It was a torturous process indeed. Before creating an algorithm, and even before presenting to the client, we needed to double check that this wasn’t luck and that we could find more bowties in the plays. Three copywriters started looking for them on YouTube goal compilation videos and among all of the material the client shared with us. It took days, weeks, and months to get it done. We used this process to find 30 or 40 goals, then talked to the client who got their digital team to start working on an algorithm to help us find more goals faster.

LBB> Tell me a bit more about the process of finding certain goals that included the Budweiser bowtie. That must have been a huge – but fun – undertaking. How did you tackle it?

Carlos> As I mentioned above, it was torturous at times but also a fun and exciting thing to do. The tricky part was that, of course, we wanted to feature football superstars such as Cristiano Ronaldo, Messi, Rooney, Cantona, Gerrard, Beckham… you name them, we wanted them. The real problem was that sometimes when the bowtie was in the play, it wasn’t very exciting and was in a match between two smaller teams in the league. Those goals got discarded pretty quickly because we wanted to create a sense of excitement.

Another challenge was that after two months of searching for goals, we had almost three times more goals from the Premier League than La Liga, so we needed to keep going to find a balance. Additionally, we tried to art direct the footage of the goals like we did in the print part of the campaign and we did several motion-illustration videos but after three months, the global brand teams from both leagues told us we couldn’t alter any footage of the goals, so we were back to square one.

The last challenge we faced when looking for the goals came about three weeks before launching the campaign. The client told us that Juan Pablo Angel (former Aston Villa player) would join the campaign as an ambassador, so we needed to find the bowtie on one of his goals. We watched almost every single one of his goals in the Premier League before we found the perfect fit, just weeks before the campaign launched. 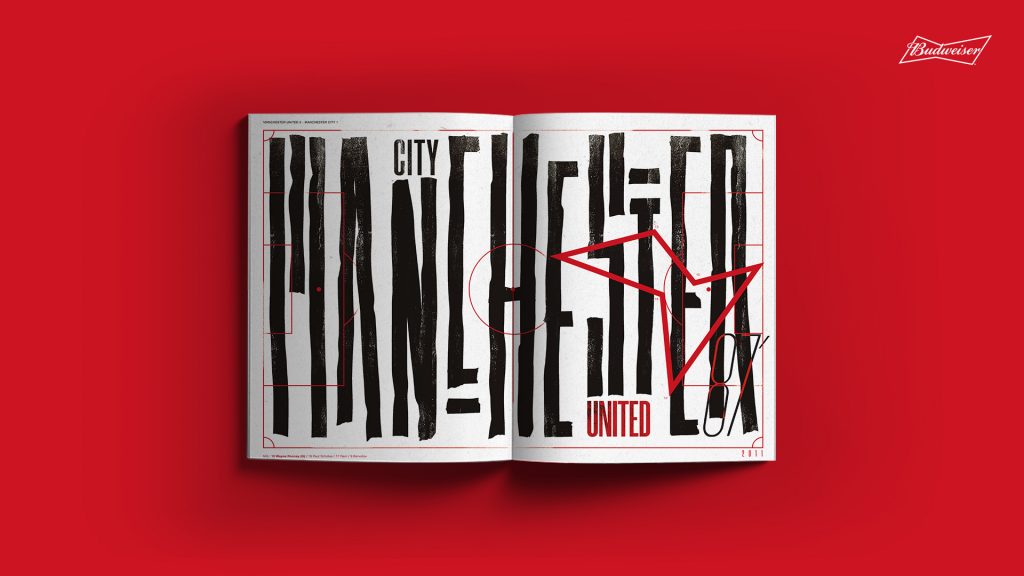 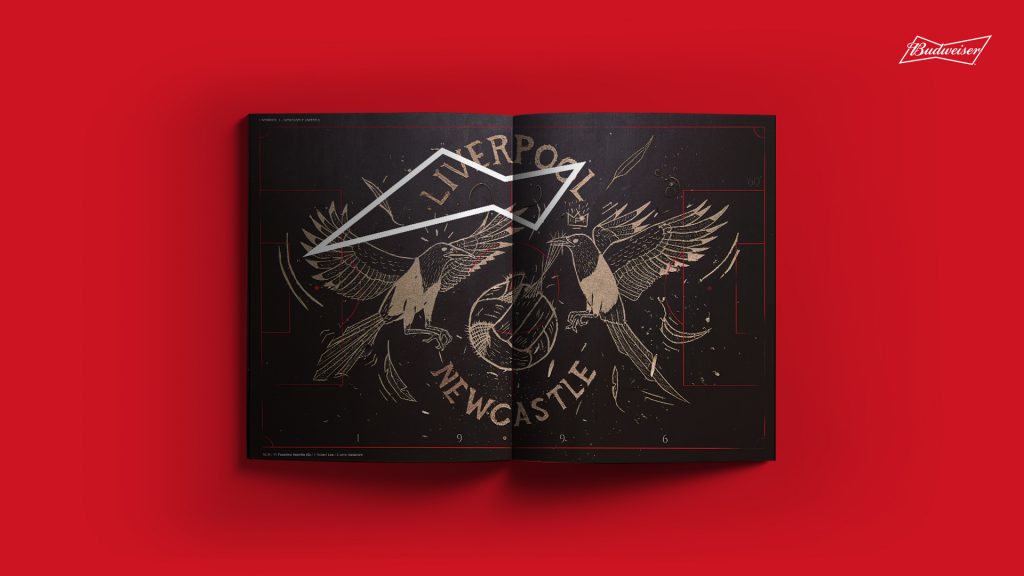 LBB> You also immortalised the campaign as a book – tell me about that part of the campaign.

Carlos> For me, the book was the most exciting part of the campaign. The team who created it included two creative directors, three copywriters and seven art directors. I told the art directors to let their imagination run wild and design each goal with a different craft and technique. I told the copywriters the same thing (the text is less visible in the book, but it includes poetry, fiction and even a biblical-like style in some instances). I was so excited about the process that I decided to write one of the goals myself. Luckily for me it was my favourite player’s goal, CR7.

This whole process took over nine months. Every single page of the book was plastered across the walls in my office, and we revised each page every single day. Any pages we didn’t like we removed and started all over again. It was exhausting and sometimes frustrating, but we all really wanted to create a beautiful piece of work, so embraced every part of the process. There were a number of goals that we loved but we had to leave them out! 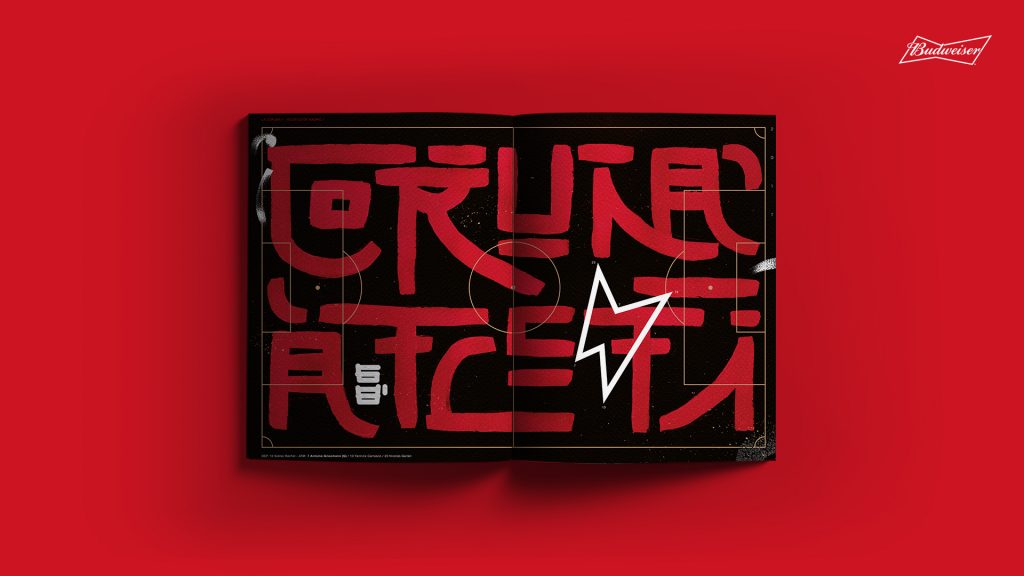 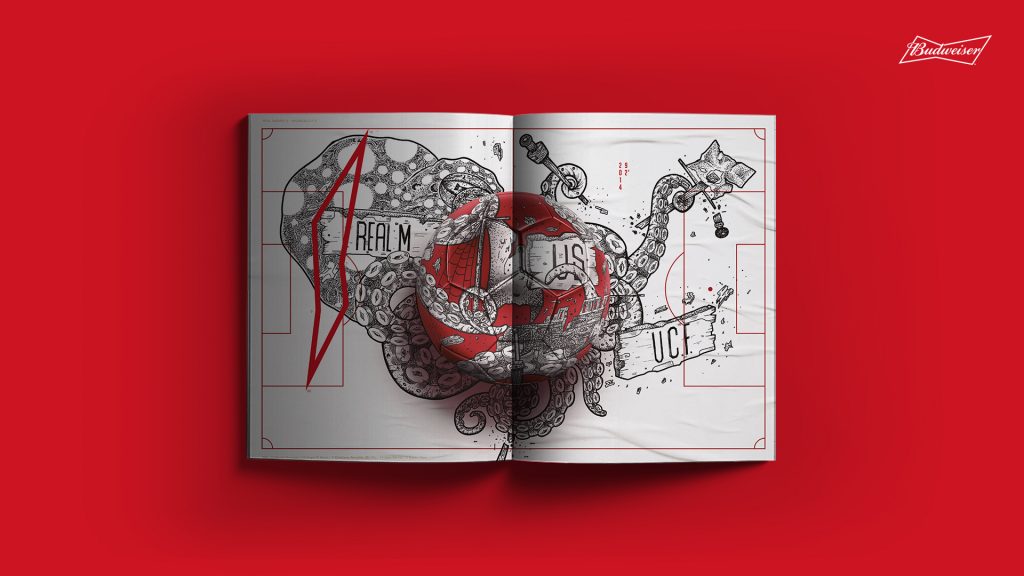 LBB> What kind of reaction did you see to the campaign?

Carlos> Launching the campaign was crazy! People were very engaged from the moment it went out – they just loved it! Many people were tweeting about how they wanted the book, asking how they could get a copy. Others discussed which of the goals were better, and why others weren’t included. The ads ran across YouTube and other sports channels which fueled even more discussion across social media. Some people even posted goals that they had created on FIFA! We were all very happy with the result!

LBB> What were the trickiest components and how did you overcome them?