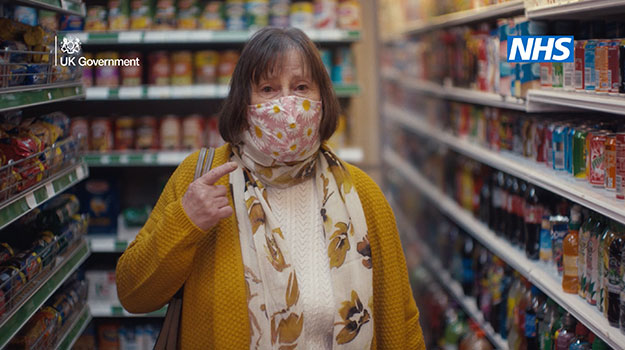 The Department of Health and Social Care has released its “Hands. Face. Space” TV ad campaign as it battles against a second wave of the coronavirus outbreak.

The work, created by MullenLowe London, was released last night (9 September) at 8pm following the Prime Minister’s announcement that, from 14 September, people in England cannot meet in groups of more than six people.

The ad shows a range of people washing their hands, making sure they are social distancing and wearing a mask in public areas. They explain that they are doing so to help protect family, friends, colleagues and strangers.

The voiceover is, once again, delivered by actor Mark Strong.

The ad was created by Laila Milbarrow and David Parker, and directed by Max Fisher through Knucklehead. Media planning and buying was handled by Manning Gottlieb OMD’s dedicated agency, OmniGov.

It is running across TV, video-on-demand, out-of-home, social, radio and press.

Separately, the government also released a more scientifically focused film earlier yesterday by PR agency Freuds to show exactly how the virus can spread indoors, as more people spend time inside over the upcoming colder months. It depicts how coronavirus can be passed to others through droplets from the nose and mouth.

Chief medical officer Professor Chris Whitty said: “As we approach winter and inevitably spend more time indoors, we need the public to keep following this important advice to control the spread of the virus.

“‘Hands. Face. Space’ emphasises important elements of the guidance we want everybody to remember: wash your hands regularly, use a face covering when social distancing is not possible and try to keep your distance from those not in your household.

“Following these simple steps could make a significant difference in reducing the transmission of Covid-19 and help protect you and your friends, colleagues and family from the virus.”

This article was originally published on Campaign UK