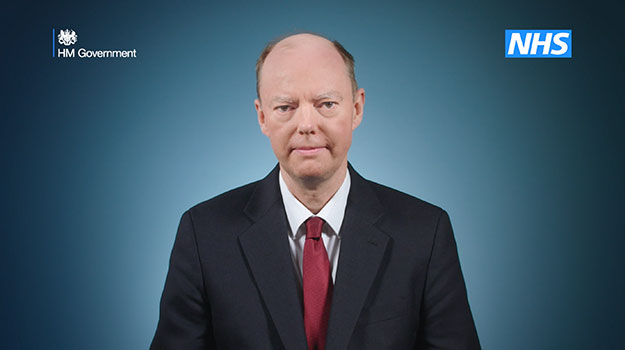 Following the Prime Minister’s televised address at the start of the week, where he announced stricter measures to combat the spread of the coronavirus outbreak, the NHS has unveiled the next phase of its expanded coronavirus public information campaign to reinforce his message.

On Monday (23 March) Boris Johnson addressed 27.1 million people in the country, describing the coronavirus a “moment of national emergency” and instructing the nation to stay at home – only to be allowed out for a small number of specific reasons.

To reiterate these new measures, MullenLowe Group UK has created the next phase of the expanding coronavirus campaign that follows the same format as previous campaigns, with the chief medical officer, Chris Whitty addressing the country directly.

“To help save lives, stay at home,” Whitty tells the camera. “Anyone can spread the coronavirus. You should now only go out when absolutely necessary – for food, medicine, work for exercise. Always try to stay two metres apart. Do not meet others outside your household, even friends or family.

It ends with the poignant message, read by the actor Mark Strong, that states, “Stay home, protect the NHS, save lives.”

MullenLowe Group UK was briefed yesterday morning about the next phase of the campaign. It shot the film with Whitty last night, with the edits being approved this morning. Strong’s voiceover was recorded this morning. The campaign will appear across print, out-of-home, social and digital.

This is the third phase of its ongoing campaign. Last week, the government launched a campaign to urge people to stay at home for seven days if they developed a high temperature or new continuous cough, as it shifted into the ‘delay’ phase of its action plan. This saw it raise the risk from moderate to high. The first ‘contain’ phase encouraged the public to wash their hands.

While an investigation by Sky News called out the government for not accepting Facebook’s offer of free ad space for ministers to reach out directly to users, the Government has been accepting its offer of free credits – but choosing to promote it from its NHS account opposed to GOVUK.