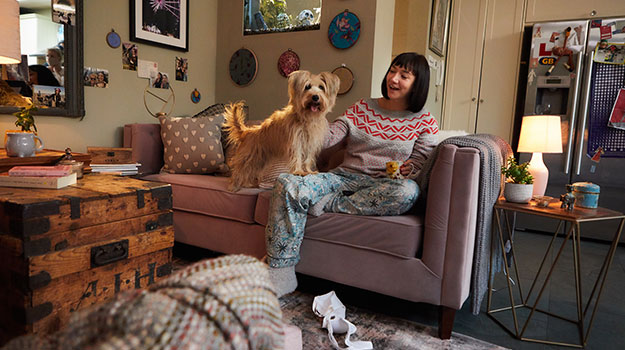 Dunelm has launched a brand campaign depicting the “universal truths of home”.

“Home, we get it” was created by MullenLowe London, and features a series of vignettes based on real-life stories shared by the brand’s customers and staff – from the now familiar scene of a woman attempting a video meeting at work, while her small child runs around in the background, to the timeless struggle of getting a bed sheet to fit over a mattress topper.

It includes a 90-second film, while a 30-second edit will be shown on TV, with the first airing during This Morning on ITV today (9 October). It will be supported by digital, radio, social and instore activity.

The campaign was created by Bronwyn Sweeney and Loren Cook, and directed by Jesper Ericstam through Nice Shirt. Goodstuff is the media agency.

Jemma Williams, director of brand and marketing at Dunelm, said: “We love home truths. Every home may be different but we can all relate to the same moments. For our autumn campaign, instead of inventing stories, we enlisted the help of our customers and communities to tell us what home means to them.

“We wanted to reflect authentic moments that are relatable, engaging and firmly position Dunelm as a brand that gets home. While still being warm, we wanted to show the reality of home, not just bricks, mortar and picture-perfect moments. Comfortable, content, messy and brilliant. Right now, for many of us, home is the best feeling in the world.”

Sweeney added that with home having become a bigger fixture in most people’s lives this year, the agency was keen to create something reflecting the stories that people were sharing online.

“The fact that our ad opens with a woman taking her bra off after a long day shows how Dunelm aren’t afraid to tell it like it is and also means that me and Loren have peaked for 2020,” she said.

In February Dunelm launched a series of idents for its sponsorship of Channels 4’s First Dates, which followed a one-year sponsorship of This Morning.