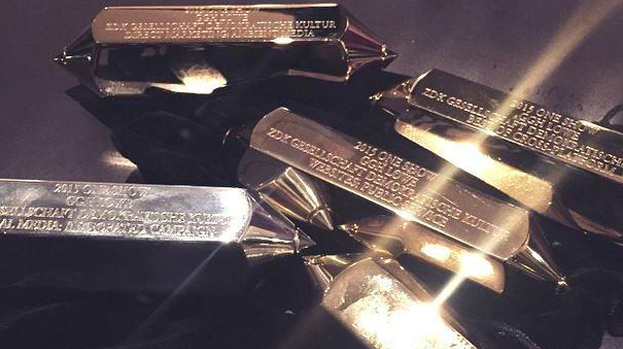 Jose Miguel Sokoloff, President, MullenLowe Group Global Creative Council remarked: “The One Show has always been one of the most respected shows in our industry. It is an enormous honor to have work amongst the winners. This is a show that is hard to win because the standards are very high and the competition is exceptionally tough”.

Taking the lead for the network was GGH MullenLowe Hamburg, which placed in eleventh place globally on The One Show’s Awards Ranking. Success this year was due in thanks to the ‘Nazis against Nazis’ campaign in which a Neo-Nazi demonstration was turned into a charity walk. The initiative supported Exit Deutschland, a charitable organization that helps people leave neo-Nazi groups. The idea, in addition to, executional media responsibilities involved collaboration with agency Grabarz & Partner.

Benedikt Holtappels, CEO of GGH MullenLowe commented: “I am extremely proud of the ‘Nazis against Nazis’ campaign. It has not only generated huge creative success, but has proved to be extremely effective in doing what great advertising should do: Drive social change”.

The One Show awarded ‘Nazis against Nazis’ the following

MullenLowe Shanghai was also highly awarded for their ‘Human Traffic Signs’ campaign created for General Motors Buick brand. The campaign recruited real traffic accident victims, who held up traffic signs at the spots where their accidents actually happened, offering a stark warning of the dangers of not obeying traffic laws.

The ‘Human Traffic Signs’ campaign was the most awarded Chinese creative campaign of 2014 taking the Grand Prix at both the Great Wall advertising festival in China and China 4As, the Grand Prix at AdStars in Korea, Gold at Cannes, two Golds at the London International Awards, as well as being named the second most awarded campaign at Spikes Asia 2014.

The One Show awarded ‘Human Traffic Signs’ the following:

MullenLowe U.S. took home two pencils for work with American Greetings and National Geographic Channel. To promote American Greetings cardstore.com, MullenLowe U.S. highlighted the importance of the role of mothers by posting job listings and holding interviews online for ‘The World’s Toughest Job.’ The position was explained to be full time, and it paid nothing; also known as being a Mom. The emotionally awakening campaign made people realize Mom’s value, then prompted people to visit cardstore.com to make Moms a card for Mother’s Day.

“The real reward for ‘World’s Toughest Job’ came from a global re-awakening for the importance of moms and how much they sacrifice for all of us,” said Mark Wenneker, Chief Creative Officer at MullenLowe U.S. “Earning a Gold Pencil from an organization as reputable as the One Show puts an amazing cherry on top.”

The One Show awarded ‘The World’s Toughest Job’ the following:

MullenLowe U.S. partnered with National Geographic Channel to show the world what happens when you sync up with a satellite going 17,000 mph around the Earth. You see the world from a whole new perspective. LiveFromSpace.com synced up with the International Space Station and allowed visitors to see exactly what was happening down on Earth. Visitors could explore the top iTunes songs, YouTube videos, Twitter trends, Foursquare check-ins and more in any country around the world, exploring a world with no boundaries and no borders – just like the astronauts.

The One Show awarded ‘Live From Space’ the following:

The One Show awarded ‘Captain Risky’ the following:

LOLA MullenLowe, Spain helped Spanish Football magazine Libero explain life through football, delivering a campaign that propelled an unknown magazine into Spain’s pop culture with the campaign: ‘If they explain it with football, you get it’.

The One Show awarded ‘If they explain it with football, you get it’ the following:

Two members of the MullenLowe U.S. creative team were also recognized for special commendation. Joe Palasek, Associate Creative Director/Technologist, was honored as a One Show “One to Watch, a group of global creative professionals under the age of 30 who are challenging traditional modes of brand expression.” Joe was instrumental in the creation of ‘Live from Space.’ Andrea Mileskiewicz, Associate Creative Director, was named a One Show “Next Creative Leader, ten women destined to be the creative leaders of tomorrow.” Andrea was a lead creative on ‘World’s Toughest Job.’

We proudly congratulate all of the winners and would like to thank The One Show for honoring the campaigns from the MullenLowe Group network. The winning work can be viewed here.