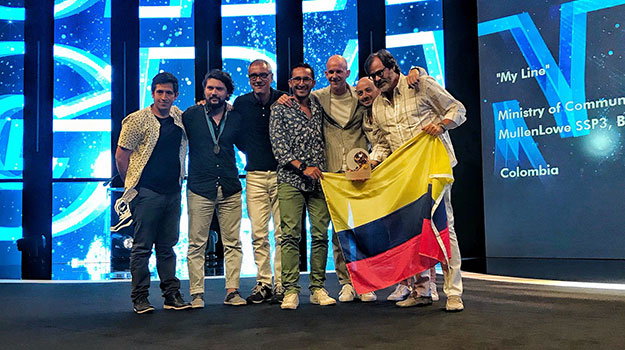 MullenLowe Group is excited to announce MullenLowe SSP3 has been awarded the first Innovation ‘Grand Prix’ in Latin America for ‘My Line’, a campaign created for the Ministry of Technology and Communications Colombia.

‘My Line’ aims to make use of legacy phones and make information available for the population that owns them, to bring internet access to those without a computer or smartphone. Powered by technology that ‘translates’ the voice into data and vice-versa, the platform turns a traditional landline number into a resource that people can call for information no matter the moment, place or device.

Francisco Samper, President of MullenLowe SSP3 says for the last 20 years, the agency has insisted that advertising creativity can help make the world a better place. “The beautiful thing about ‘My Line’ is the enormous potential impact it can have for people who live in remote rural areas and do not have smartphones, computers or internet access yet; or for the visually impaired, or the illiterate, for example.”

“Now they will all have the same opportunity to access information as people who have the best technology at hand. That’s why President Santos and David Luna, the ex-Minister of Technology of Information and Communications, have provided so much support to the idea since the first moment: because of its potential to become a great social tool,” he continued.

Cannes Lions Innovation Jury President Tor Myhren noted one jury member said the campaign won because of its brutal simplicity. “I think that’s exactly what it is, it’s one of the ideas you see and say ‘how has nobody ever done this before?’ Those are the best ideas, simple, scalable, and have a very profound impact on human life,” he continued.

Jose Miguel Sokoloff, President of MullenLowe Group Creative Council and Chief Creative Officer, MullenLowe Group UK says he’s incredibly proud of what the network has achieved this year. “To be awarded a Grand Prix at Cannes is an amazing achievement. The strength of the ‘My Line’ work is testament to the strength of the MullenLowe SSP3 team, and truly demonstrates how a campaign can make a difference and be a force for positive change in the world.”

“The whole MullenLowe Group network has put in an amazing performance at Cannes this year, and the amount of awards truly demonstrate our ability to gain an Unfair Share of Attention for our clients’ brands. I look forward to seeing how the end of the week unfolds!”  he continued.

Winners for Film, Creative Effectiveness, Glass, Titanium and Sustainable Development Goals will be announced on the final evening of the festival. MullenLowe Group has received six shortlists in Film (LOLA MullenLowe, MullenLowe U.S. and Ponce Buenos Aires) and one shortlist for Titanium (LOLA MullenLowe).