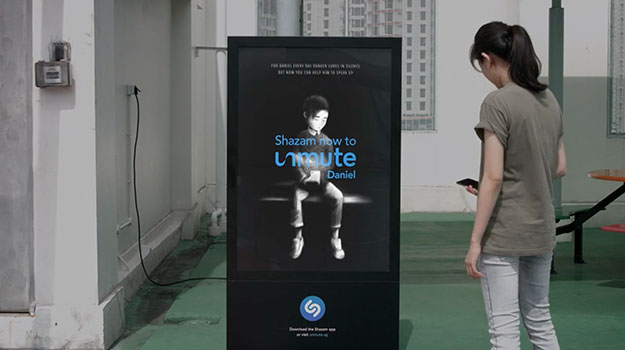 MullenLowe Group has collaborated with Shazam to roll out the ‘Unmute Daniel’ campaign, in a bid to raise awareness around the issue of cyberbullying in Singapore.

‘Unmute Daniel’ is a digital campaign that utilises technology to communicate with their target audience of youths and their parents. The campaign mascot, Daniel, represents every child who has experienced cyberbullying.

To make Daniel and other children speak up, the ‘Unmute Daniel’ campaign turns to technology, a medium that has once silenced them, to give them a voice.

The campaign utilises media screens, that project a sound with a frequency inaudible to the human ear, and display a message by Daniel encouraging people to open the Shazam app on their smartphones.

Once the sound has been detected by the Shazam app, it links to the campaign website unmute.sg, which shares the story from the perspective of Daniel, the victim, as well as of the bully and bystander. These are based on actual cyberbullying cases that have occurred in Singapore.

The website contains scenarios and advice from Singapore Children’s Society regarding cyberbullying, and what one can do as the victim, parent or teacher.

Shazam, the app synonymous with music discovery, has evolved to become a powerful gateway for content discovery. The extent of its evolution is evidenced by Shazam’s ability, in this instance, to recognise silence via an ultra-sonic watermark playing from OOH installations.

Steve Sos, Shazam’s APAC MD said, “We are thrilled to be partnering with MullenLowe Group on such an important pro-social initiative. It would certainly be “music to our ears” to know we have done a little to help replace silence and fear with awareness and hope for those affected by cyberbullying.”

In partnership with Posterscope Singapore, a leading OOH media agency under the Dentsu Aegis Network, media sites have been strategically handpicked for the creative execution. The media installations will be exhibited at Clear Channel’s bus shelters, DECK art space, and in schools across Singapore.

Spearheaded by Sergey Mastobaev, Associate Creative Director, and Raul Palhares, Senior Copywriter, MullenLowe Profero, the idea for the campaign came about during a discussion on the prevalence of cyberbullying in Singapore, and realising that more than half of victims do not share their experiences with anyone.

Radhe Vaswani, Managing Director of MullenLowe Profero, said, “Unlike physical bullying that often leaves behind scars and bruises, cyberbullying is much harder to spot. We want to turn technology against technology and demonstrate that while cyberbullying is more rampant than people realise, there is always a way to fight it.”

Rosalynn Tay, CEO of Dentsu Aegis Network Singapore, added, “Cyberbullying takes place in an intangible environment, and we are proud to be part of this campaign to bring this issue into the physical world and highlight its prevalence. By bridging the digital world with the physical, we want people to realize this is an important issue which requires tangible actions in order for cyberbullying to stop.”