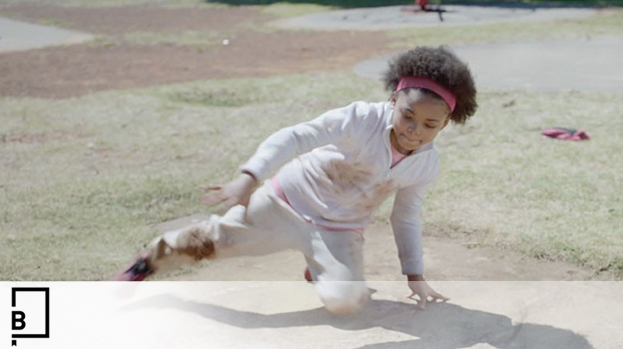 Persil, the leading laundry brand from Unilever UK, is launching a brand new global film as part of its ‘Dirt is Good’ campaign. The 50 second brand film, titled ‘Breakdancing Girl’, has been developed to introduce Persil’s innovative Dual Capsule format and highlight the brand’s ethos that ‘Dirt is Good’. The film will feature in multiple global markets, running across TV and online, whilst the integrated campaign will be supported by OOH and digital activity.

The new global video, developed by MullenLowe London, focuses on B Girl Terra – a young breakdancing prodigy from the UK who recently performed at Glastonbury festival. See coverage on BBC and Guardian.  ‘Breakdancing Girl’ follows Terra practicing her dance moves outside in the park, getting increasingly dirty in the process. Reflecting Persil’s ‘Dirt is Good’ positioning, which has long been associated with child development, the film highlights that getting dirty helps children to unleash their potential.

At the end of her impressive dance routine she performs an incredible sustained b-boy headspin and spins her tracksuit clean – a visual metaphor for the cleaning power of Persil capsules, which provide powerful stain removal with every spin.

Zeynep Yalim-Uzun, Global Vice President of ‘Dirt is Good’ comments: “This film delivers our strong brand philosophy with a fresh, modern execution that highlights the innovativeness of our Dual Capsules.”

Alex Okada, Global Creative Director states “The power of the idea resides in its simplicity: a highly enjoyable visual connection. It’s the first example of a new direction and campaign that will be launching for the brand soon.”

The film, shot on location in South Africa and directed by Nadia Marquard Otsen of Academy, has already launched in France and Switzerland and will roll out across the UK, Spain, Portugal and Denmark this month followed by further international markets.