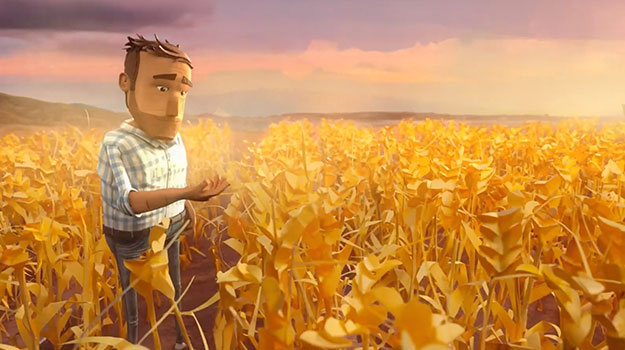 MullenLowe South Africa has launched a new television commercial for GWK as a follow up to their award-winning and ground-breaking 2015 commercial. The new TVC Old MacDonald Has A Farm, promises to leave an even bigger impression on viewers.

Four years ago, MullenLowe South Africa created an animated TV advertisement for agri brand GWK that acknowledged South African farmers and other people in agriculture for the role they play in feeding the nation. The TVC, This Man Is Building A Rocket, was a visually compelling story created using a combination of stop-motion animation and CGI. The acclaimed TVC went on to win one Loerie and three Pendoring awards.

This Man Is Building A Rocket was the first GWK campaign to include a TVC. The follow-up animated film, Old MacDonald Has A Farm, builds on the success of the first and continues the narrative. It tells the story of where a farmer’s passion for farming was born. How agriculture has changed over time, how technology has changed the world of food supply and how knowledge is exchanged between generations.

MullenLowe South Africa ECD Kirk Gainsford explains that the success of the first advertisement for GWK made the production of the second one both terrifying and exciting.  “When GWK challenged us with the next story, we knew we couldn’t make something as good as the last one, we had to make something better.”

The first GWK TVC took four months to shoot and produce, described by Gainsford as an insane time of creative energy. “This time around we spent more time developing the characters and their own stories. Although two separate stories about the people who produce the food we eat, we decided to feature the same family – we meet the whole family and we travel all the way back to the past,” he says.

The voice tells the child’s story, Old MacDonald had a farm, which has been rewritten by MullenLowe South Africa. “This story is about every farmer, no matter how big or small. The end line says it all, “… and now he wakes up every day to feed you and you and you, because, that is just what farmers do.” continues Gainsford.

The project, Directed by Ruan Vermuelen of Bewilder took four weeks of shooting with six creatives capturing and animating every movement. Another team built miniature sets at the studio. While shooting, a team of six animators and compositors worked on the animation. 3D printing was used to create the complicated objects, with at least half of the objects in each scene having been 3D printed.

Neil de Klerk, executive head of GWK Group marketing and communications, states that we should never underestimate South African talent. This Man Is Building A Rocket he says gripped the imagination of people worldwide. “We believe that the next instalment in the story will do exactly the same, and we’re very proud that this incredible story has been produced locally in partnership with MullenLowe South Africa. This campaign recognises the incredible people that together are working for a better future for all of us.”