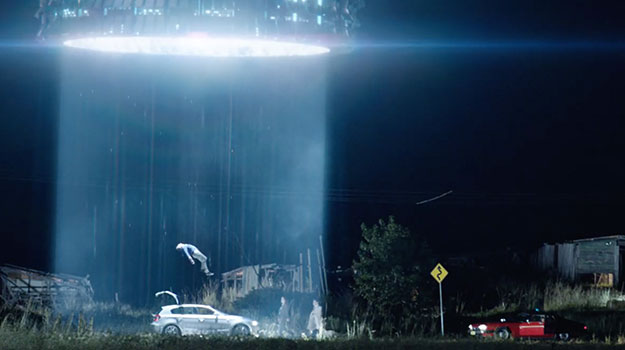 Special Detectives Sarge and Jac are back in Budget Direct’s latest campaign instalment created with 303 MullenLowe.

In the new spot titled ‘Budget Direct – UFO’, Sarge and Jac happen upon Gary who is moments away from an extra-terrestrial encounter.

Undistracted by the huge UFO hovering above, Sarge is only interested in trying to understand why Gary is paying so much for his insurance.

The campaign continues the ‘Insurance Solved’ positioning for Budget Direct.

Jonathan Kerr, CMO at Budget Direct says, “This part of the campaign shines a very bright light on another inexplicable reason why some people keep paying way more than they need to for their insurance,” Budget Direct chief marketing officer Jonathan Kerr says.

“We hope that the ad will encourage Australian’s to start 2020 off by saving on their Car and Home & Contents Insurance, with Budget Direct’s multi awardwinning insurance.”

The spot was created by 303 MullenLowe and shot by Danny Kleinman through Rattling Stick / Good Oil Films and photographed by Mat Baker through Louis & Co.

“Our work for Budget Direct continues to lead the category with campaigns that are entertaining as they are effective. Sarge’s single minded focus to solve the conundrum of why people would needlessly pay more for insurance than they need to, provides the perfect comedic platform for the most extraordinary potential distractions to be ignored!” 303 MullenLowe Australia CEO Nick Cleaver says.

The creative will run across TV, cinema, online, outdoor/indoor display and radio channels, with cinema kicking off on Boxing Day.

This article was originally published on AdNews