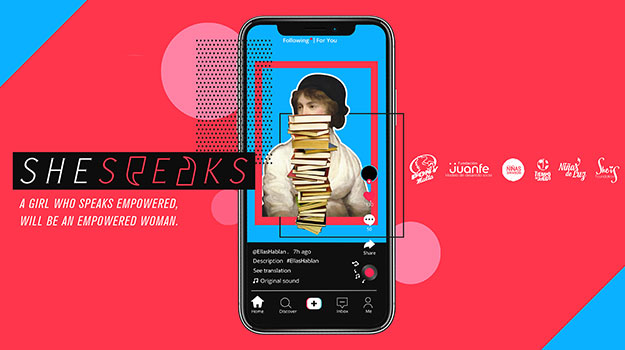 Pony Malta is one of the most popular beverage brands for teenagers in Colombia, and they’re using their influence to encourage girls to seek inspiration from pioneering women from history. A new social campaign from MullenLowe SSP3 in Bogota, #SheSpeaks, urges teenagers to share quotes and messages from female pioneers across social media.

The initiative launches on TikTok for International Day of the Girl and uses one of the platforms most popular features, dubbing. With quotes from over 100 women including Michelle Obama, Christina Koch, Malala Yousafzai, Lady Gaga and the late Ruth Bader Ginsburg, girls can record themselves lip syncing their words to inspire and empower others.

Juan Alonso Torres, ABInBev’s Pony Malta Marketing Director says, “Over 54% of TikTok users are women, with many creators influencing girls around the world in the way they dress, do their make-up, exercise and even the way they speak. Pony Malta stives to encourage teenagers to be the best version of themselves, so we hope #SheSpeaks inspires and empowers young girls to be anything they want to be, and encourages them to follow women to dared to dream big and really make a difference.”

Carlos Andrés Rodríguez, Chief Creative Officer of MullenLowe SSP3 says, “TikTok has more than 800 million users worldwide, 41% of which are teens. Through #SheSpeaks, more than 100 fragments of words, speeches and interviews have been collected and uploaded to TikTok influencer, @ellashablan’s page to organically become part of the content that girls and teens share every day. For the first time, girls won’t be speaking over songs, movies or funny audio, but over the voices of many important women throughout history.”

The content is also available through Instagram Reels and will be live for the rest of October. #SheSpeaks is supported by a number of NGO’s including Fundación JuanFe, Niñas Sin Miedo, Niñas de Luz, She Is and Tiempo de Juego.