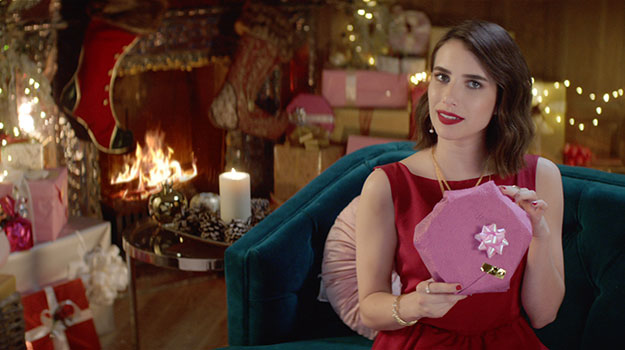 Christmas time is here and everyone is in search of the perfect gift, but TOUS has the almost perfect option and it’s even better.

In this holiday campaign, TOUS, presents a musical that tells the story about the joy of giving with a song all about their unique packaging. The jewellery brand is about to celebrate 100 years of giving joy in its famous round box and they aren’t taking themselves too seriously. You don’t need to worry about wrapping the gift perfectly, what matters is what’s inside.

With a warmth and humour, Emma Roberts accompanies us on a holiday journey in this film directed by Belén Gayan. The campaign is an ode to Christmas: happiness, family, snow, sparkling lights, a catchy tune and of course, poorly wrapped gifts.

An XXL round box

To launch the campaign in spectacular style, during the month of December, Spain’s capital will wake up to its main train station converted into a huge round TOUS box. A giant-size almost perfect gift to get the holiday spirit going.

Según Anaïs Durand, director of marketing and communication, TOUS said: “This time of year is all about joy and giving. At TOUS the holidays are a time to celebrate together and find happiness in sharing. In our festive, musical campaign starring Emma Roberts, we play with the excitement of giving something special to someone you care about, without taking ourselves too seriously. After all, the perfect gift is the gift you put your heart into.”

“We wanted to create a holiday campaign that only TOUS could do. When you’re buying a gift and they tell you ‘sorry, we don’t gift wrap’ a small drama starts and usually ends in a mess. Boxes without wrapped corners, creases strategically hidden, tape everywhere…and that’s when the box is square. If you try it with one of TOUS’s famous round boxes, well, the drama turns into a charming disaster.” says Néstor García and Nacho Oñate, executive creative directors, LOLA MullenLowe.

The campaign was launched on November 22nd on television in Spain, Mexico, Portugal and Russia, and will continue throughout the holiday season in digital, outdoor and press in more than 17 markets around the world including the USA, Canada, Poland, Colombia and Puerto Rico.