MullenLowe U.S. has created The Black Catalog, a site focused on Black wellness that features a collection of articles, conversations, tutorials and workouts. 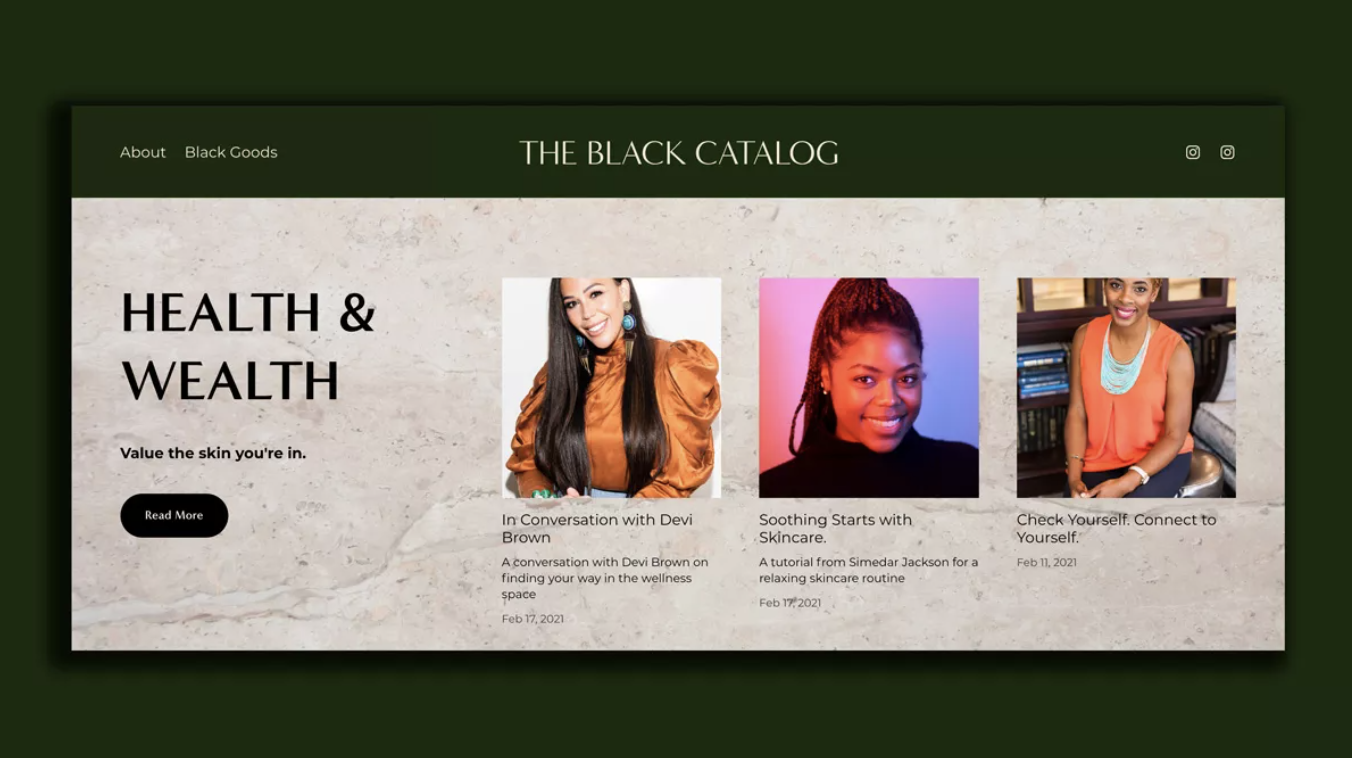 Sometimes, binge watching can lead to inspiration instead of idleness. At least that was recently the case for Pilar McQuirter, who joined MullenLowe U.S. in October as cultural strategy director.

When McQuirter took on her new role, she joined Black@MullenLowe Group, its employee resource group for Black employees. After one of the group’s meetings, she started chatting with Maya Smithson, an assistant account executive at the agency, about what they could do for Black History Month.

The two started tossing around ideas, and found that they were both drawing inspiration from pieces of history that also happened to be featured in HBO shows they were bingeing at the time.

Smithson was bingeing Lovecraft Country, which references the Green Book, a travel guide published in the 1900s that listed which businesses and restaurants welcomed Black people. Meanwhile, McQuirter was watching the HBO show Watchmen, which depicts the Tulsa race massacre, a 100-year-old attack on Black people that occurred in Tulsa, Okla. and marks one of the worst outbreaks of racial violence in U.S. history.

Reflecting on these events, and knowing the discrimination and trauma Black people have faced throughout history, they wanted to make something that would focus on healing instead.

“We were like, ‘How can we create something for Black History Month that allows us to prioritize our safety and our well being?’” McQuirter said.

That’s how they landed on the idea for The Black Catalog, a site focused on Black wellness that features a collection of articles, conversations, tutorials and workouts. 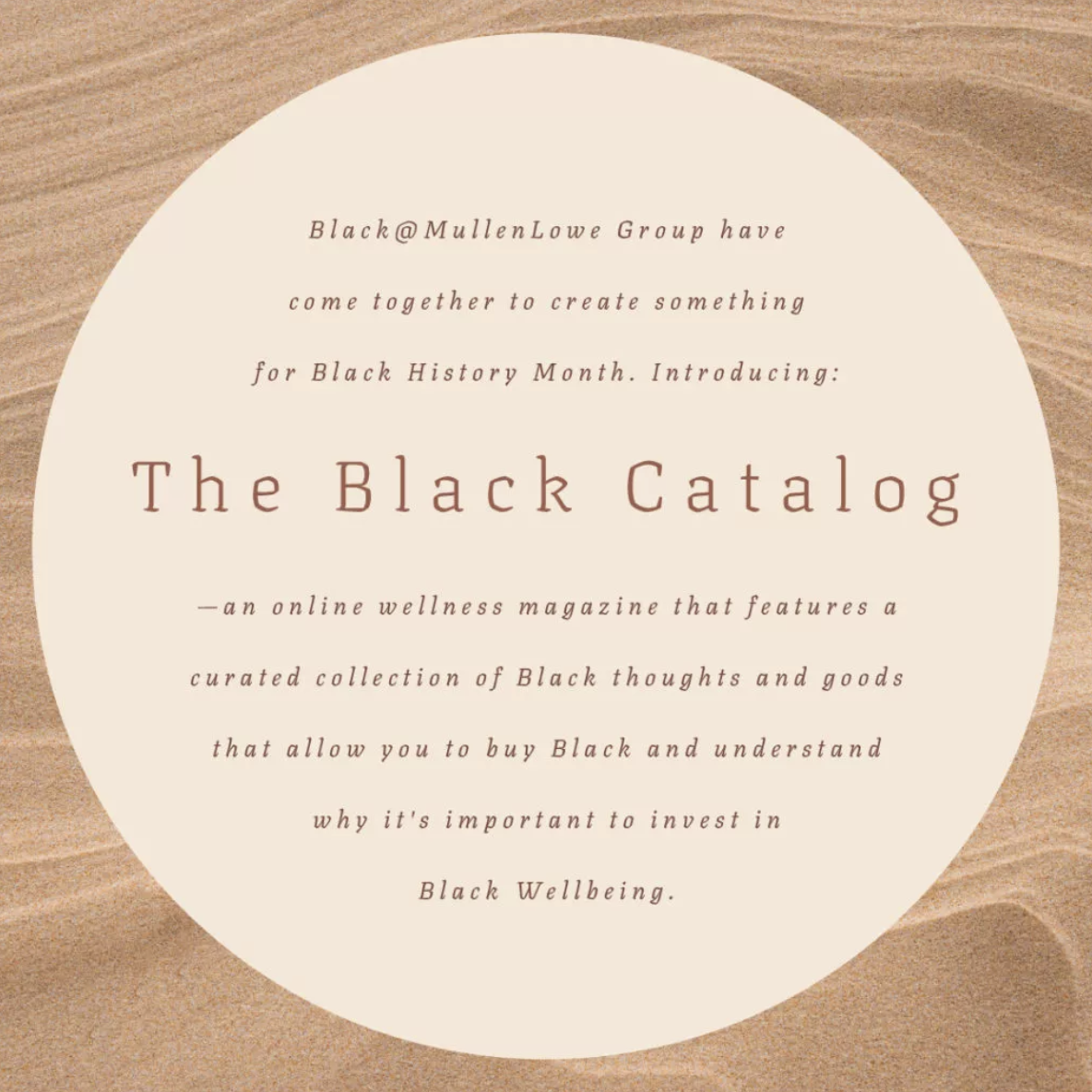 “We wanted to focus on the positives. Oftentimes, when you see work done for Black people, or even sometimes by Black people, it’s centered around the trauma we experience and how to get out of that,” Williams said. “We didn’t want to fall into speaking to our trauma; we wanted to have a positive lens on ways that we can prioritize our own wellness without mentioning the reason why we need to.”

Right now, it features content from eight contributors, some of whom are MullenLowe U.S. employees. For instance, Jazmen Edwards, a recruiting coordinator at the agency, penned a piece on financial wellness for the site.

Williams said she and McQuirter also tapped into their personal networks to see who would be interested in contributing. According to McQuirter, Black@MullenLowe Group ensured that each person who created something for the site was paid for their work.

“The process wasn’t like, ‘Hey, can you write this for us?’” she said. “It was actually like, ‘Hey, we know that you care about the wellness space, and as a Black person, are you interested in talking about that intersection? If you could, what would you talk about?’”

The open-ended nature of it let people determine what they wanted to do. For example, Genesis Roberts, a fitness trainer and friend of Williams’, opted to create a 15-minute workout video.

“Because they were friends of ours, it was really beautiful in that we could just have them talk about what they want, as opposed to commissioning them to write a very specific piece,” McQuirter said. “It was really collaborative in that way.”

In addition to content, the site includes a section called “Black Goods” where visitors can shop for products and services, all of which were personally recommended by Black employees within IPG, which owns MullenLowe.

“The goods that you see there are just recommendations from Black people. They’re not sponsored; they’re just goods that we felt like we should feature,” McQuirter said, noting that it’s not just products like sunscreen or moisturizer that are available, as the section also includes links to organizations that provide services such as therapy.

Even though Black History Month has ended, McQuirter said Black@MullenLowe Group will continue to evolve The Black Catalog.

“The point of this platform is that it’s evergreen,” she said. “This is our platform to speak up beyond client meetings, beyond that seat at the table you might get in new business. This is our space to talk about what we need, so I think it’ll continue throughout the year. Honestly, it’s just about capacity and bandwidth.”

Some additions are already in the works, but McQuirter said she can’t divulge details quite yet.

“All I can say is that we look forward to having celebrity interviews in the future. That is my PR line,” she quipped.

CREDITS (those with an asterisk are not Black@MullenLowe Group members):