Little Black Book has announced the winners of the 2020 Immortal Awards and we're pleased to share MullenLowe Brazil has received a Commendation at the Awards!

The Commendation was awarded for MullenLowe Brazil’s ‘#AskFor24’ project for Institutional / Corner Magazine, and MullenLowe Brazil named the number one creative agency in both LATAM and Brazil!

Throughout history, the No. 24 has been widely regarded as a number to avoid among local footballers in Brazil, and still it remains a taboo for them to wear it on the pitch. Not because it’s unlucky or cursed, but because in Brazil, the No. 24 is traditionally associated with being gay. With homophobia still permeating the top flight of Brazilian football, Corner Magazine approached MullenLowe Brazil in order to change the public’s attitude and perception of this number, and the team launched #AskFor24 to bring the No. 24 onto the pitch. The Brazilian sports media embraced the movement and it started a huge debate on social networks. Most importantly, the campaign had results on the field, with more and more clubs and players wearing a jersey with the No. 24.

“#AskFor24 had a mission, not to gain attention, but to change a homophobic behaviour in Brazilian society. Corner is proud to have brought about real change in the country’s main sport and use football as a teaching tool. We wanted players to choose a number that carried a homophobic history and make it what it should always have been: a number like any other. The mission was accomplished,” says Fernando Martinho, executive editor of Corner Magazine.

“In an information-saturated world, it is rare when a campaign can do more than simply draw attention to a message. #AskFor24 was able to have an impact on a cultural level by touching on such a deeply-seated prejudice. And more than that, the movement was able to break an old taboo and give a new meaning to the number 24 in the context of football. We are very proud of this achievement,“ Eduardo Salles, Executive Creative Director, MullenLowe Brazil. 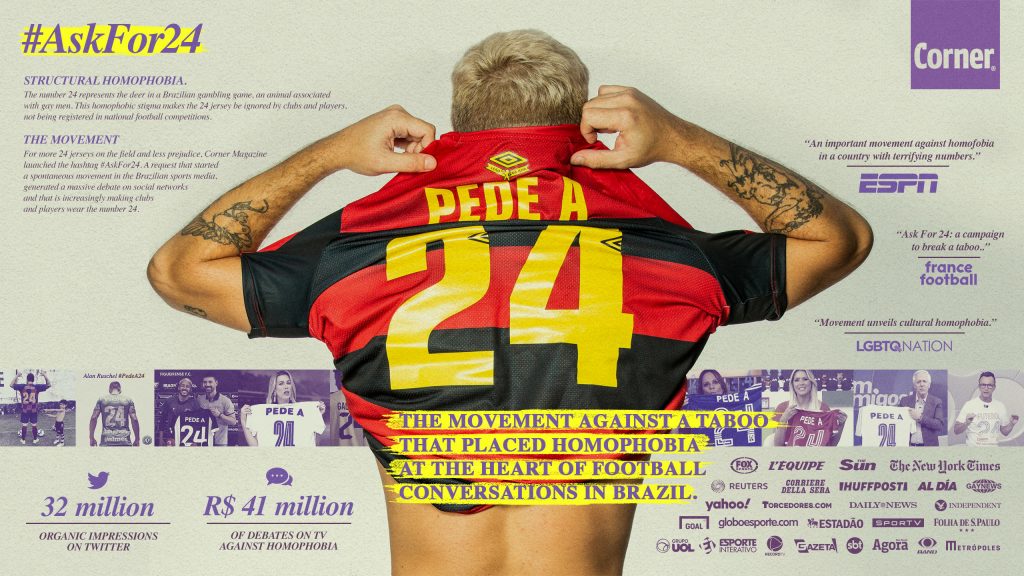 Additionally, MullenLowe SSP3 and Ponce Buenos Aires were named among shortlisted entries for their ‘Beer Cap Project’ and ‘Sparkling’ projects respectively. As a result, MullenLowe SSP3 has been ranked third in the top creative agencies in LATAM and first in the top creative agency in Colombia, Ponce Buenos Aires has ranked fifth in LATAM and first in Argentina, and MullenLowe Group has ranked fourth in the Top Agency Networks in the World in 2020!

See the winning work on LBBO