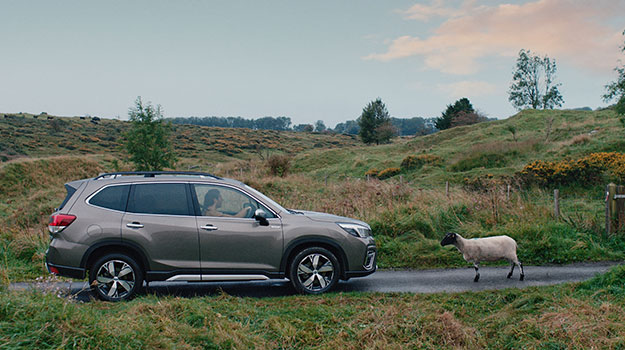 To showcase the safety features of its first self-charging hybrid, Subaru has painted a picture of what flashes before a sheep’s eyes before it becomes roadkill.

‘Flashback’ was created by MullenLowe London, who won the account back in 2017, and promotes the Subaru Forester.

To illustrate the beneficial safety properties of its automatic pre-collision braking, Subaru has turned to the victims of road-collisions – sheep.

The spot opens with a Subaru Forester gliding around a winding mountain pass. Unbeknown to the driver trouble lies ahead, as a sheep who doesn’t get the highway code has made itself comfortable on the road.

As the car shoots around the corner unexpectedly, the sheep looks on like a deer in headlights. Assuming the worst, its life flashes before its eyes – from its cute beginnings as a new-born lamb, through to the present day, covering all the various fields it has found itself in.

Media is being handled by Goodstuff and launches today across TV, digital, PPC, and print. The campaign is also the first time Subaru has run a campaign on dynamic radio, with over 2000 different personalised variants.

Discussing the launch of the campaign, Alexandra Bevan Lyons, head of marketing at Subaru said: “At Subaru, we’re incredibly proud of our commitment to building the safest cars on the road. In this ad we wanted to demonstrate just how impactful Subaru’s EyeSight driver assist technology can be. Rather than go down the line of the cliché emotive car advertising route, we chose an ad that will have standout for all the right reasons.”

Adding to this, Laurence Green, executive partner at MullenLowe London said: “Unlike most car brands, Subaru genuinely deserves an unfair share of our attention: they’re better where it matters, as evidenced by the happy survival of our sheepish co-star.”