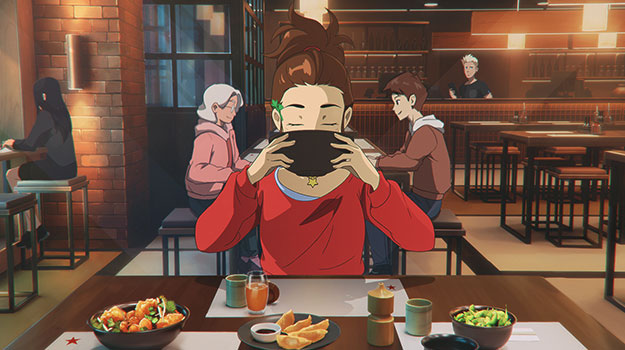 Wagamama’s anime ad may get your stomach rumbling for ramen

Restaurant chain Wagamama is continuing its anime-inspired campaign, From Bowl to Soul, first launched in 2018, with a new campaign depicting life in London.

The new spot was created by MullenLowe London in collaboration with Danish anime director Mads Broni via Passion Pictures. It depicts a young woman heading out from her London apartment to meet friends at a branch of Wagamama. As she picks out her order, we see the chef choosing and preparing the ingredients. When she finally digs into her meal, the taste of the food transports her to a magical world with field of coriander, floating dumplings and rivers of ramen.

Unlike that first ad, which interspersed live action with anime sequences, this one goes all out with the animation for a more traditional anime feel. Running online and in cinemas as a 30-second version, it was created through a combination of hand-drawn and computer illustrated artwork.  “I’ve loved the challenge of using anime, a style associated with Asian environments, to show life in London,” said Broni in a statement.  “It’s been enjoyable to express my love of the style, respecting the tradition of anime animation and making it feel current, relevant and adventurous.”

Once again, it will probably make you crave some Japanese food; however, the aim of the campaign is to focus not just on the food, but on the feeling inspired by the food, says the company. The chain also seems to be anticipating the public’s appetite for all things Japanese with the upcoming Tokyo Olympics, though the coronavirus threat poses an uncertain future for the Games. According to Chief Marketing Officer Ross Farquhar: “Wagamama has always been a keen student of Japan, and in the year in which the British public is set to widely fall in love with anime we’re delighted to be introducing the brand to a whole new audience through this beautiful art form.”