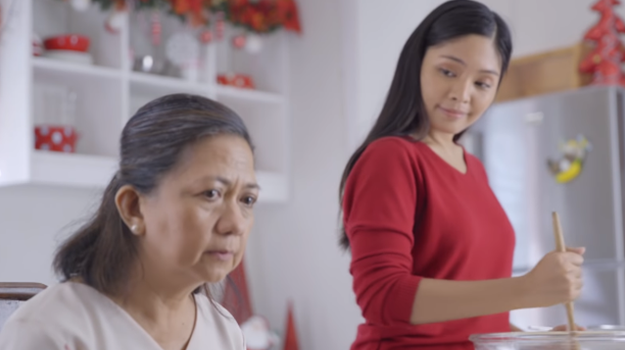 Dementia is one of the world’s cruellest illnesses. That’s true wherever you go, but in the Philippines the issue is particularly prevalent. Despite 10% of the country’s over-60 population showing symptoms of dementia, there is comparatively low public awareness and medical support.

It’s an issue that MullenLowe Philippines have sought to address with their enormously successful campaign, ‘Paalala’ (meaning ‘Reminder’ in English). Juxtaposed against the standard rampant positivity of the festive season, Alaska Milk’s campaign cuts through with a powerful and bittersweet emotional punch.

To find out more about the campaign, and why the holiday season was the right time to get this message across, LBB’s Adam Bennett spoke to MullenLowe Philippines’ creative director Roman Olivarez.

LBB> Where did the idea for this campaign come from, and how did it come to happen?

Roman> A few people in the team shared their stories of loved ones who are suffering or have suffered from dementia, which inspired us to make a film to raise awareness of the issue.

LBB> Why was Dementia something that Alaska Milk wanted to talk about?

Roman> A big chunk of the Alaska Milk business is made up of its milk products made for cooking. It’s a heritage brand with recipes handed over many generations. In the Philippines, cooking is a way to show love to one’s family and the whole process of making a meal – from cooking to consumption – is a way to bond with your loved ones. As Christmas is a special time which calls for lots of cooking, it’s often unforgettable. That’s why we wanted to tell a story about memories, from the ones we make, to the ones our minds forget. We wanted to use dementia to show this bittersweet reality – there are memories that the mind forgets, but the heart remembers.

LBB> Is the issue something that’s particularly prevalent in the Philippines?

Roman> Yes, absolutely. One in every 10 Filipinos aged 60 and above has signs of early dementia. However, support for those suffering and knowledge about the disease is not that widespread. Sadly, this means people with dementia often suffer in silence, especially in a family who has no knowledge of proper care.

LBB> And why was Christmas the right time to talk about this?

Roman> The majority of the campaigns in the Philippines at Christmas are about merrymaking. It’s the biggest celebration of the year, after all. But behind all the festivities, in the middle of memory-making and reminiscing about the year that was, we wanted to ask a question – what if we stop remembering? And from there, the story was created.

LBB> Are there any insights that came up during your initial research that helped to shape this campaign?

Roman> Research on dementia informed the team that oftentimes, the bursts of remembering do not last long or are even impossible during the late stages. That’s why it was a big decision to not have the character of the grandmother be lucid in the final scene, hence the bittersweet ending.

LBB> What were your main aims and ambitions going into the campaign?

Roman> Just two things. First, to start conversations about dementia. And second, tell people to start making memories with your loved ones today, because you never know what the future holds.

LBB> What kind of reception has the campaign received?

Roman> The campaign has exceeded our expectations. It was heartwarming, to say the least. We were slightly worried at first given the ending of the film doesn’t have the usual happy resolution, but comments about the film were positive and inspiring and it’s been shared widely. Some Filipino celebrities even shared the film on social media with their own memories of their old folks.

Roman> The team behind the campaign believe that memories made with love are the ones the stay in the heart – that no forgetful mind can erase. So this holiday season, cook up a hearty meal and create new memories that we hope will stay.

This article was first published on LBBO