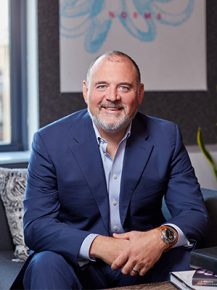 Alex was appointed global chief executive officer of MullenLowe Group in May 2015, upon the merger of Interpublic Group agencies Mullen and Lowe and Partners. He oversees a creative, media, and integrated communications agency network with more than 6,000 employees and hubs in 65 global markets, including New York, Boston, LA, São Paulo, London, Madrid, Singapore, Mumbai, Shanghai, Tokyo, and Sydney.

Since his appointment, Alex has instituted a global rebranding and repositioning across the MullenLowe Group global network, driving business growth and creative- and effectiveness-award success, including recognition as an Advertising Age A-List Agency. Interpublic Group has recognized Alex’s success in growing the network by adding additional agency oversight to his portfolio, including the Martin Agency, renowned for its iconic creative work with GEICO, and Campbell Ewald, a Detroit stalwart.

Alex previously served as chief executive officer of Mullen—one of the most awarded and fastest-growing agencies in the United States, receiving accolades from the industry’s most notable organizations, including multiple Ad Age A-List designations, and recognition as a Fast Company Most Innovative Companies in Advertising and Marketing and Forbes 10 Great Agencies.

Alex joined Mullen from Fallon in 2009, where he was a key strategic leader on brands including BMW, Garmin, Equinox Fitness, and United Airlines, which he guided during the post–September 11 period.

Born in Kiev, Alex immigrated to St. Paul, Minnesota, as a child and graduated from Carleton College with a BA degree in Russian Studies. He served as a military police officer in the United States Army National Guard. Alex and his wife Jenni are raising their four children in Marblehead, Massachusetts, and somehow find time to compete in Ironman triathlons.