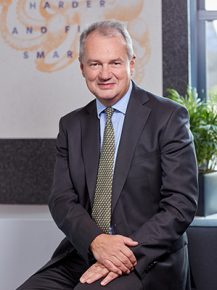 Hugh joined MullenLowe Group in 2008 after a twenty year career with WPP in which he held leadership posts at two of its networks, JWT and Conquest. At JWT he was Chief Financial Officer for both EMEA & Asia Pacific and prior to this he was Conquest’s Chief Financial & Operating Officer. Whilst at Conquest he was based in both Turin and Paris where he set up Conquest in Italy and then built the network in all other key European markets. Conquest subsequently re-launched globally as Red Cell/United.

Hugh joined WPP in the late 80’s where he had a diverse portfolio of responsibilities including oversight of its PR network Hill & Knowlton and a number of market research and marketing services companies.

Hugh began his career in finance and after qualifying as a Chartered Accountant spent three years with Deloitte & Touche, specialising in corporate recovery.