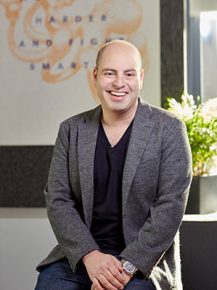 James Fox is the Global Chief Strategy Officer at MullenLowe Group. In this role he oversees a group of nearly 200 strategists in 90 offices around the world, developing award winning work for multinational brands across multiple categories.

Prior to MullenLowe Group, James spent 6 years as Chief Executive Officer at Red Peak Branding, building one of the fastest growing branding agencies in the U.S. James started his career at St Luke’s in London working on award winning work for IKEA, Emirates and Clarks shoes. He then made the move to the U.S. to work at Fallon Minneapolis where he ran global strategy for United Airlines, winning two Gold Effies in one year, one Silver Effie and an Emmy. From Fallon, James moved to BBH where he ran the strategy for Levi’s and British Airways in the U.S. and then onto TAXI as their Chief Strategy Officer. During his tenure at TAXI they established a thriving New York office and opened four more offices globally. Strategy Magazine voted TAXI agency of the year twice in a row under James’ leadership. From TAXI he joined BBDO where he led the billion-dollar rebranding for AT&T’s wired and wireless business globally, before taking the role of Chief Executive Officer at Red Peak.

James was voted Innovator of the Year by Internationalist magazine in 2014 and was named a Future 50 CEO by Smart CEO magazine in 2015 and 2016. He has written for and been quoted regularly in the Wall Street Journal, Forbes, Time Magazine and has appeared numerous times on Fox News to discuss marketing issues. James Fox holds a BSc in Psychology from the University of Leeds, and Masters in Industrial Psychology from the London School of Economics. He has been a board member of the charity Free Arts, which provides art education and mentoring at no cost to children throughout New York City.

James lives with his wife and son on the Upper East Side of Manhattan.