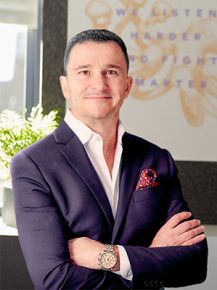 John is the global CEO of Mediahub. He oversees all U.S. and global offices, including Boston, New York, LA, London, and Sydney. He is responsible for crafting the company’s vision and spearheading new business initiatives. John has established Mediahub as a force in media-only pitches.

John has been in the business for over 20 years and has worked on other big brands, including H&R Block, GM, Whirlpool, Monster.com, and Converse.