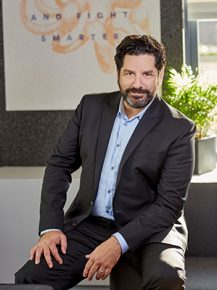 Mark has been called a fire starter—the kind of guy who’s always trying to shake things up. That’s pretty much what he’s done at MullenLowe U.S., where he has led a creative resurgence for brands including Acura, Google, JetBlue, Zappos, Patrón, Royal Caribbean, Whole Foods Market, and E*TRADE.

MullenLowe U.S. has enjoyed a breakthrough run of creative recognition, with eight Effies in 2017, the Grand Effie in 2015, more than a dozen Cannes Lions, and multiple appearances on the Ad Age A-List and Creativity Innovators list.

Mark came to MullenLowe U.S. after a nine-year stint at Goodby Silverstein & Partners, where he developed the creative on the “It’s Comcastic” and “The Slowskys” work for Comcast, Hyundai’s “Think About It,” Budweiser’s “True,” HBO’s “Water Cooler,” and Saturn’s “Sheet Metal.”